Some potato markets have been a little busier ahead of the bank holiday weekend. Coastal regions in particular have enjoyed an uptick in trade as the hospitality trade gears up for a long weekend. Forecast sunny and warm weather, following a cold wet period, could drive further domestic tourist movement.

Next week’s half-term break has seen demand decline for education sectors. This has affected some chipping, packing and processing markets.

An increase in warmer sunnier weather is now needed for the planted new-crop; the many days of rainfall potentially delaying future lifting operations. A common belief of a ‘week or two’ delay is held, with lifting of some fields now expected in July. If warmer weather appears, crops will be able to push on well with adequate moisture reserves held in the soil. 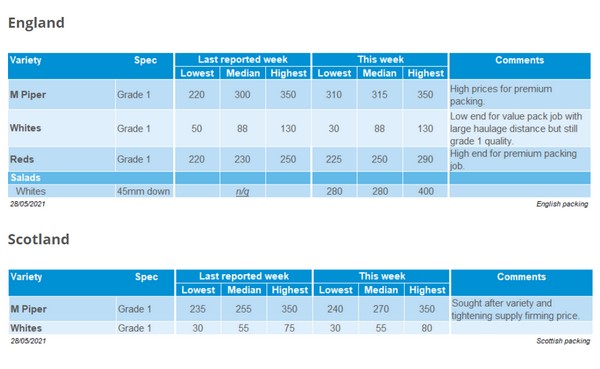 The processing trade has been steady this week. Demand has faltered slightly for some with the half-term break for schools next week.

Maris Piper supplies have been difficult to source as stores begin to empty. This week, the median price declined £35/t to £130/t, owing to a reduced level of quality within samples traded.

Reports are that the export season for tourism trade has come to a close. No prices have been quoted this week.