Customs data show that in April 2021, China’s banana import volume was 226,300 tons, the import value exceeded 120 million U.S. dollars, and the average import price was 540.21 U.S. dollars per ton. The imported volume increased by 22.35% from March and 17.11% from April 2020; the cumulative imported volume from January to April increased by 9.68% from the same period last year. 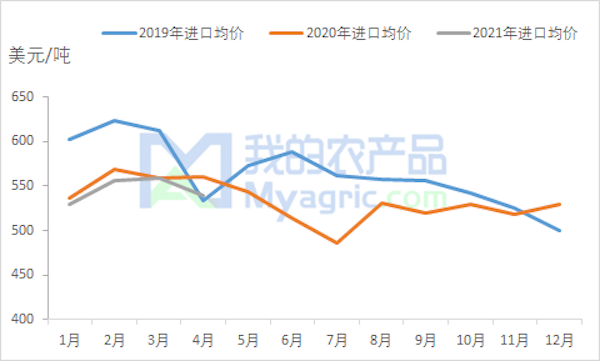 As shown in the figure, the average import price in April 2021 was significantly lower than in 2020 but slightly higher than in 2019, down 3.74% year-on-year and 3.40% month-on-month. Due to prevention and control measures of the Covid-19 pandemic in some production areas, shipments are restricted. As the temperature rises, bananas ripen faster and become more difficult to store and transport. There are also cases of rotten fruit or fruit falling from the bunch. The quality has been affected and prices have fallen.

At present, Myanmar and Laos are in the off-season, and the shipment volume is small. The recent market of bananas from Laos has fluctuated slightly. Due to the high temperature, some products are rotten, and the feedback from customers is not positive. The season in Yunnan, a local production area in China, is also coming to an end, and large volumes from Hainan are on the market with varying quality, chaotic pricing, and average sales. As the temperature rises, a large volume of seasonal fruit is flooding the market, and the fruit market is under great pressure in terms of competition. It is expected that the banana supply will exceed demand in the short term, the overall market will stay weak, and there are no notable conditions to boost the market for the time being.