Pinduoduo: “Live-stream promotions bring unique fruits and vegetables directly from the original production area to the attention of Chinese consumers”

The commercial attaché of the Royal Thai consul-general in Shanghai set up a meeting with agriculture-focused technology platform Pinduoduo on the 10th of May to kick off the “2021 Thai product live-stream" activity. The Royal Thai consul-general in Shanghai, Ms. Lada Phumas, and the commercial attaché, Ms. Jeeranun Hirunyasumlith were guests on the government live-stream called ‘last-minute bargain’. They used this platform to promote seasonal Thai fruit for Chinese consumers.

The Royal Thai consul-general, Ms. Lada Phumas, stated during the live-stream that “Sino-Thai trade increased by 38% in the first quarter of 2021, and is steadily overcoming the impact of the Covid-19 pandemic. That is why the commercial attaché of the consulate in Shanghai supports the promotion of imported products from Thailand on the technology platform Pinduoduo, so that we can further develop the growing trade relations between China and Thailand.” 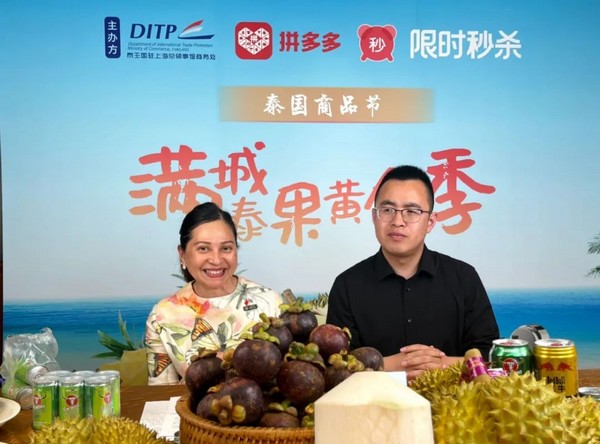 Ms. Lada Phumas continued to interact with netizens during the live-stream and passionately promoted Thai export fruits such as durian, longan, green coconuts, and mangosteen. She explained, “China has always been one of the largest export markets for Thai products. The initial outbreak of Covid-19 in 2020 did not diminish our mutual trade, but stimulated further growth instead. The most popular Thai fruit, according to Chinese consumers, is the durian. More than 40% of the Thai export fruit volume consists of durian.”

Commercial attaché Jeeranun then took over the live-stream to show Chinese netizens how to distinguish different varieties of Thai durian, as well as mangosteen and green coconuts. “The durian is called the ‘king of fruits’, but there are many varieties. The most popular variety in the Chinese market is the Mon Thong [Golden Pillow] durian. The fruit flesh is a light yellow. The flavor is butter-like and sweet. More importantly, perhaps, the fruit flesh is thick and the stone is small,” said Ms. Jeeranun.

The live-stream lasted four hours and during this time more than 9,000 Mon Thong durian, with a combined weight of more than 18 tons, were sold. “This is the second time Pinduoduo has worked together with the Thai government to promote Thai products for Chinese consumers,” said a spokesperson from Pinduoduo marketing department, “Last year we organized a similar activity and received amazing feedback.”

In recent years, Pinduoduo has established working relations with many different governments to organize promotional live-streams for a great variety of import products.

“Fruit and vegetables are among the most important products on the Pinduoduo platform. We will continue to facilitate the sales of import agricultural products with high quality and attractive price,” said the spokesperson.