Remember the Greenhouse Robotic Worker developed by MetoMotion? Over the last couple of years we followed the development of the robot intensively and now there's new news to share. Last year MetoMotion partnered with De Ruiter to trial the GRoW system at the De Ruiter Experience Center. In October, an official milestone measurement was taken and showed that GRoW harvested a complete row of tomatoes with a 90% success rate and no human intervention. 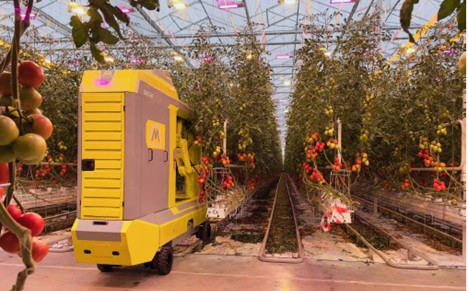 GRoW is a multipurpose robotic system designed to reduce labor requirements in the greenhouse. According to the company, GRoW’s first application is the automated harvesting of greenhouse tomatoes but the system will eventually perform a range of greenhouse tasks. These additional tasks include harvesting other crops, pruning, monitoring and De-leafing.

“The GRoW’s first task will be to harvest truss tomatoes and box them,” says MetoMotion. “This is one of the most labor-intensive tasks. Applying GRoW can reduce harvesting costs by 50% and manhours by 80%.” According to MetoMotion’s website, the predicted ROI is less than three years.

Proven performance at the De Ruiter Experience Center
In 2020, MetoMotion partnered with De Ruiter to trial the GRoW system at the De Ruiter Experience Center. Partnering with De Ruiter allowed the company to test the GRoW system in a real-life greenhouse environment and take advantage of the facilities, experience and in-house knowledge at De Ruiter. In October, an official milestone measurement was taken and showed that GRoW harvested a complete row of tomatoes with a 90% success rate and no human intervention.

Supported by these positive results, MetoMotion will be installing its first pre-production robots in North America and Europe. The company will be offering GRoW to a limited number of commercial growers by the end of 2021, allowing growers to see the robot at work and provide feedback to MetoMotion. Grower feedback will then be used to further optimize the system before the commercial rollout, at which point GRoW will officially launch.

According to MetoMotion, “the COVID-19 pandemic underscored the urgent need for these technologies. Travel limitations, lockdowns and remote work became the new standard and exacerbated the labor crisis that growers were already experiencing.”

While the pandemic highlighted the demand for GRoW, it also made certain operations more difficult although MetoMotion was able to adapt to keep its research & development on track. A major challenge during the pandemic is the fact that the pilot project was deployed in the Netherlands while the MetoMotion head office is in Israel. With support from De Ruiter and others, MetoMotion successfully conducted the pilot project remotely by controlling the robots from the head office in Israel.

“This a good example of how the future is going to look. The greenhouse robots are doing routine tasks while the supervision and support are mostly done by remote access. This is better for our planet, better for greenhouse disease prevention, better for the overall social impact of foreign labor, and of course more profitable for growers,” says the company.