The global mango market shows a varied picture across the board, as many importers transition from one origin to another. Some markets such as the Netherlands and Belgium struggling with low market prices, whilst Germany, in contrast, experiences high prices. Supply is limited to the North American markets, whilst the Asian markets suffer from oversupply, bringing down the prices here. India, unsurprisingly, faces tough challenges due to the increasing pressure caused by the ongoing pandemic.

Netherlands: Tough mango market outside the supermarket programs
This week the last mangoes left Ivory Coast. The rain that set in early last week has ended shipments prematurely. This ensures, among other things, more unstable fruit in terms of ripening, as a result of which there is too much ripe fruit on the market. Although no supermarket promotions have been planned in Germany for the past two weeks, the regular programs towards the supermarkets are continuing well. A Dutch importer has observed pressure on the market among traditional importers without programs, who do not know where to dispose of their mangoes. Prices on the free market have therefore collapsed by 40%. More promotions are planned at the end of next week and that is expected to boost sales. The Keitt mangoes from the Dominican Republic and Keitt and Palmer from Brazil have also continued reasonably well with good quality mangoes. 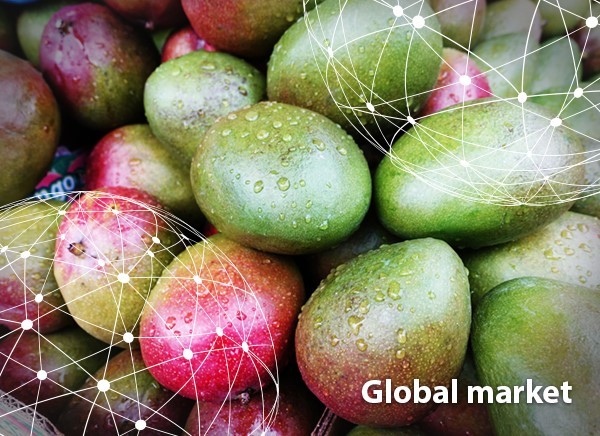 Belgium: Prices stable after a period of decline
The Peruvian mango season is over and the Ivorian season is in full swing. “Ivory Coast started two weeks earlier, but Peru also continued longer than usual,” says a Belgian importer. “Both countries had a lot of supply of large sizes, namely size 6 and 7. However, not all retailers buy large sizes, which put prices under even more pressure. After a significant decline, prices are currently somewhat stable again.” The Ivorian season runs until the end of May / beginning of June. The quality of the mangoes is good. The season will be followed by the West African countries. According to the Belgian importer, the demand for mangoes has been good all year round. "It is still a growing product."

Germany: African season running at full speed
The mango market in Germany has had a difficult seasonal transition from Peru to Ivory Coast. The last Peruvian volumes were traded at the end of April, Ivorian merchandise was initially available in limited volumes. At the moment there is still too little supply on various wholesale markets, so prices are on the high side. At the same time, the demand for exotics in the wholesale trade has been at a relatively low level for months due to the closure of the catering industry. Now that the first easing seems to be on the way, it is suspected this could change in the short term.

Italy: Prices fall as varieties flood market with low consumption level
Mango consumption in Italy is particularly high at the moment. The market for mangoes imported by air is regular, while the market for mangoes imported by sea has collapsed. An operator of a wholesale market in the north of Italy says that at the moment there is mango from Brazil, by air, of medium quality. "There is also product from the Ivory Coast, also imported by air, which reaches up to 7 €/kg and is of fair quality. Mangoes imported by ship from South America cost less, around 1.20 - 1.50 €/kg and are mostly destined for price-conscious traders. To get a top-quality product, we will have to wait 2-3 months, when small Italian and Spanish producers will start producing. A product that also benefits in terms of logistics."

A wholesaler from Milan adds: "The Brazilian product, with the Tommy Atkins and Palmer varieties, is present in Italy 12 months a year.  From Peru and the Ivory Coast we mainly get the Kent variety, which is gaining popularity in Italy.  In the last few weeks, unlike last year at the same time, the Italian market has been filled with imported mangoes by sea, causing a general drop in prices (7 € for 4 kg boxes compared to 10-11 € in 2020).  The wholesale price of imported mangoes by air is around €45 for the 5.5-6 kg box, with the product at the right point of ripeness. Because of the high price, only the most prestigious retailers in Italy put it on their shelves."

Another operator from northern Italy confirms the start of the campaign for the mango Kent from the Ivory Coast by air and sea. "The campaign will last about a month waiting for the Mexican product, and then we continue with the Israeli mangoes. If about three weeks ago the Ivory Coast product by sea was demanding 6.50-7.50 €, now the Kent mango from the Ivory Coast is paying 5.00 € and the Tommy is at 3.50 €. This is true for all varieties and origins by sea: even the Keitt from Santo Domingo, which is about to start, or the Brazilian product, are showing falling prices as they further flood the markets."

In addition, fresh-cut mangoes, which arrive in Italy ready-to-eat, are becoming increasingly important.

UK: Increasing demand for premium mangoes
The Ivory Coast season has recently started with the Kent variety coming into the UK market, with values of around £1/per kg. There are also some Brazilian Palmer and Tommy Atkins around at similar prices.

The Peruvian season generally finished a few weeks ago with overall volumes for the season down around 10% on the previous year in both in value and volume.

There is an increasing demand for tree ripened and air freighted mangoes for the premium end of the market. Typically, these values can be 4 or 5 times higher than the traditional sea freight fruit. The reason for this is that it is left on the tree to ripen for longer and air freighted to be in the markets as quickly as 2 days after picking, the overall volumes are small but there seems to be a growing following for a premium top end product.

Spain: Poor market expected to last until end of the month
Spain is currently off season and the harvest will not start until mid-August. At the moment Brazilian mangoes dominate the Spanish market, which are overlapping with the last mangoes from Peru. Other origins as Ivory Coast and Mexico –by plane- are available in the market as well. According to a Spanish importer sales are now stuck and prices are on the floor after the good months of March and April. Air freight mangoes, however, are doing much better and have more stability. The sector expects a bad market for mangoes for at least the whole the rest of May.

North America: Supplies of mangoes tight over past month
“Smaller sizes have been more available and larger sizes have been tight,” says an importer located in California, noting the growing regions had seen some cooler temperatures. Currently, mangoes are coming from Southern Mexico, Oaxaca Guerrero Michoacán and Nayarit. Competing supplies are coming from Guatemala and some from Nicaragua.

So far though, production is ahead of where it was last year at this time. “We have been moving Tommy Atkins and Ataulfo and later in May we will ship Kents and in August, Keitts,” says the importer. Meanwhile Ataulfo (Honey mango) will wind down in July.

The prices have been good so far. “This time last year, yellow varieties were lower. But, pricing levels out due to differences in timing from one region to the next. Demand this year is very good on all varieties, especially yellow.”

Looking ahead, volumes will continue to come from Michoacán, Jalisco, Nayarit and later, southern Sinaloa.

Last year COVID-19 interfered with exporting Indian mangoes to the U.S. as they can only ship under the USDA clearance program where an inspector goes to India and pre-clears it, says an importer who specialises in obtaining mangoes from this country. “Last year U.S. inspectors weren't able to do this and so far this year has been the same.”

However, recently there have been discussions between the USDA and the Indian government to develop a solution. “They’re negotiating allowing inspection to happen in the U.S.,” says the importer. “Some believe a solution could be reached in the next week or so.”

Traditionally inspectors arrive in mid-April and the season finishes by the end of June. If shipments are able to make it, the market will still be restricted due to the high freight prices, which are double to triple the regular prices. On the other hand, with no restrictions on Indian mangoes, Canadians have seen Indian mangoes on store shelves for the past month.

Australia: Positive growth in some markets despite challenges
Like most other industries worldwide, the Australian mango industry has of course faced some extra challenges, due to the COVID-19 pandemic. Despite these challenges, 8.2 million trays were sent to domestic and export markets, which is a testament to the hard work of the industry. While the volume of fruit being sent to some markets decreased due to geo-political and other challenges due to COVID-19, Australia did see growth in other markets, such as South Korea. The industry worked closely with key markets to ensure overseas markets were still able to experience a taste of Australian mangoes.

Asia: Large volumes lead to oversupply in China, while weather causes shortage in Taiwan
The current Hainan mango season is nearing its end. This year Hainan mangoes have a large output. The supply of fruit flowing into the market exceeds demand. In February, the flowering period was prolonged, and the time to market for each batch of fruit was delayed. As a result, the fruit supply experienced shortage in the short term. In April, a large volume of mangoes entered the markets, leading to a state of oversupply that is still present. The price is 1-3 yuan/500 gram, fruit farmers are mostly making a loss, and distributors are not profitable.

The first Taiwanese Aiwen mangoes of the season will enter the Chinese market this week after the production areas suffered the worst drought in 60 years. The overall production volume also declined by at least 30%. The supply season is expected to last until August.

On 26 April, the General Administration of Customs of the People’s Republic of China officially released the list of 37 registered orchards for exporting mango from Puzhai to China and 5 packaging factories. Cambodia delivered its first batch of fresh mango exports directly to China on 7 May.

India: Season picking up, but faces issues caused by pandemic
The season has started to pick up at the right moment. There will be about six solid weeks this year, which is better than the country had in 2020. Buyers seem to have a good response this time around, as demand is currently very good. As mentioned in the North American section of this article, India is facing some problems with shipping out mangoes to the United States, as they require irradiation treatment for mangoes in the presence of a USDA-APHIS officer. Due to the pandemic, an officer is not able to come to India to conduct these checks. This hurts the Indian mango exports significantly, however both Governments are still negotiating and hopefully there will be some good news on the situation soon.

South Africa: Scant demand in winter season
The South African market is currently in its off season as the orchards lie pruned and dormant, and the demand on the market is scant. As far as the import is concerned, the season from Mozambique has ended the African season here, whilst Egypt, Spain and Israel, the origins that traditionally 'kick-start' the South African season at the start of the summer, have yet to commence their trade into the country.