"Grown to 18 trailers in just over a year"

In 2017, Dirk Veldhuis sold his Agri Logistiek shares to HZ Logistics. That was after a long career in the fruit and vegetable transportation sector in the Netherlands. He'd worked at In't Veen-Visbeen, Frisch Logistiek Holland and Agri Logistiek. Dirk's been diagnosed with a terminal disease. That led to him bidding farewell to his clients at Fruit Logistica in 2018. Dirk then ticked some activities off his bucket list.

He traveled to Dubai and climbed Kilimanjaro. He also visited Antarctica, to name but a few. Some of his old, well-known clients then approached him. Would he want to do something in fruit and vegetable logistics again? No sooner was it said than it was done. In December 2019, Veldhuis Logistics was launched. The company's now grown to 18 trailers. It will add another three this week.

Satisfaction
"My prognosis isn't good. I have prostate cancer. It's now spread to my lymph nodes and bones. However, for now, I can still do everything. Should I sit back and wait? This work, at least, satisfies me. I don't know if I'll still be here this summer. Hopefully, still next summer. Besides, the business doesn't revolve around me. I set it up so that everything will continue when I'm no longer here. I started the company with Huub Driessen and my daughter Natascha," begins Dirk.

"I know Huub from my time at Int' Veen. And Natascha worked at the TNI office for years. She now takes care of our finances. Two planners have now joined us. I'm not involved in day-to-day operations. I do the charters, damages, and maintenance. But my old customers still call me with special requests. That satisfies me greatly. Transport will always be my passion. I enjoy finding solutions for clients. There seems to be a kind of demand that some carriers can't meet. We, however, can."

What distinguishes Veldhuis Logistics? Dirk believes it's mainly its far-reaching service. "If a customer wants transportation on Saturday evening, we'll fill that need. Not every carrier bothers doing that. Also, say a few pallets have to be collected in Germany, the Czech Republic, or southern France. I ensure that that's done; often in consultation with fellow haulers."

"Those trips often aren't cheap, but they do need to be arranged. For instance, I have a cooperation contract with a Slovenian hauler. We work with a coupling system of six trailers between us. They travel between Koper harbor [in Slovenia] and our English clients. They drive their trailer to the Netherlands. We then drive it to England. Customers are surprised when they receive their goods so quickly."

It's an understatement to say the logistics service provider meets a need. "We started in December 2019. We've already grown to 18 trailers under our name. This week we'll letter another three. We to round trips to the UK, France, the Benelux countries, Germany, Austria, Switzerland, and Slovakia. We're IFS-certified too," Dirk continues.

"We started the process in March last year. And we got a higher certification in October. February used to be my quietest month, but this one was top. We used to do 200 loads/month. However, by April, we'd reached 600. So, the company's future's bright, though, we don't want to grow too fast. I don't need to double again next year. If we have 25 vehicles by the end of 2021, that's good enough." 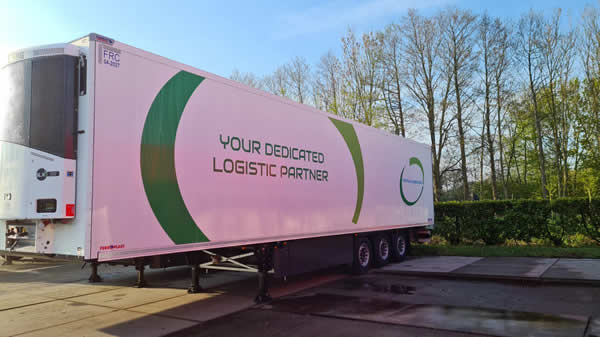 Shortage of drivers
Recruiting enough drivers has become truly challenging. "Buying vehicles isn't the point; there are no drivers to haul the goods. There's also a lot of legislation in the works. That won't make it any easier. Dutch drivers think it's fine to drive up to 400km. But, don't send them outside the Ruhr area [in Germany]. We have five vehicles with Dutch drivers. Eastern European drivers supplement the rest. That combination works well," says Dirk.

According to him, rates are under pressure too. "The big exporters determine the rates. And the various carriers' rates don't differ by hundreds of euros. But costs have risen. A round trip to Turin [in Italy] costs €800 in tolls. You used to be able to propose fare increases. Now it seems you can only reduce them. But there's a limit - you can't work below cost price."

"Also, many of our clients have time slots. I expect that will only continue. You have 15 minutes to unload your goods. If you're stuck in traffic, you must prove it," Veldhuis says. "And you then don't get extra time. For example, we transport grapes for year-round programs. You can't offload these any earlier; they're picked during the day. Fortunately, 99% of the time, it goes well."

"Then your added value's proven. At a customer's request, we now also drive to England. Some transporters tried to avoid that after Brexit. But we were in Dover on New Year's Day. If exporters have their papers in order, we take care of the correct registration. We also get our drivers tested. We love taking on challenges," Dirk concludes.