Dutch strawberry deliveries dominated over domestic and Italian deliveries. In addition, there were occasional offers from Spain, Greece and Belgium, but all in all, these were only of a supplementary nature. The quality was convincing, especially the fruits from the Netherlands and Germany had an excellent aroma and appealing coloration.

The Italian products were occasionally deficient in this respect, which led to a wide price range locally. In isolated cases, diameters were too small as well. The overall demand was quite friendly. Thanks to extensive shipments, it could be satisfied without difficulty, although it had expanded. By the weekend at the latest, customers were buying more intensively. Prices developed differently: sometimes they trended slightly upward. Although complete clearance was not achieved on a daily basis in Cologne, prices there mostly remained constant. 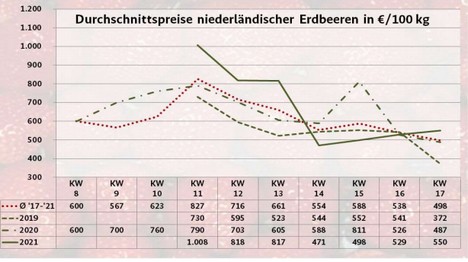 Apples
Domestic goods still predominated, with Elstar, Jonagold, Jonagored and Pinova leading the way. Organoleptic characteristics were not an obstacle to smooth sales. Demand could be satisfied, even if availability was limited.

Lemons
Spanish Primofiori were available on a monopoly basis at points. In general, presentation types had expanded as smaller calibers were increasingly offered.

Cauliflower
Supply was thus quite diverse. In contrast, interest was rather subdued. Prices fell rather than rose, as access was ultimately too weak.

Lettuce
In the case of iceberg lettuce, in line with the seasonal status, the monopolistic Spanish unloadings were limited. The quality was no longer consistently convincing, which of course had a negative impact on the prices.

Sweet peppers
The Spanish campaign was nearing its conclusion. Sellers were raising their prices, some of them quite a  lot.

Asparagus
Domestic spears dominated. In the white and purple offerings, Greek and Dutch items were the most likely to supplement. The supply grew immensely. The demand could not keep up. Price reductions were the result. "At the Munich wholesale market, there is currently very unsatisfactory pricing, despite tight supplies. North German asparagus farmers are buying in Holland in part due to scarce quantities," one trader reported.