The southeast of Spain is the first and only watermelon-producing area in Europe that has been able to place top-quality delicious watermelons in the market since mid-April thanks to its excellent climate and its greenhouses. This was made clear during the presentation of the SANDI “The first European watermelon” promotion and information campaign, launched by Coexphal and Hortiespaña, in collaboration with the Almería Provincial Council and its “Sabores de Almeria” brand. 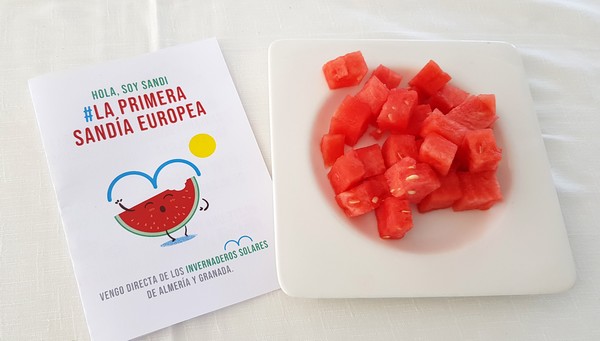 Francisco Gongora, Hortiespaña's president, stressed that the campaign was fundamentally based on direct actions and on social networks. “The success of this project is corroborated by the audience that it reached. Last year more than 200,000 people were impacted by SANDI through social networks. In 2021 SANDI is out to win consumer's hearts. That is the basis of the mini-texts that this amusing watermelon shares on social networks to promote the consumption of the watermelon grown in the solar greenhouses of Almeria and Granada. As a novelty, the campaign will have the www.laprimerasandiaeuropea.es website where it will share watermelon data, curiosities, and recipes from different chefs,” Francisco Gongora concluded.

Watermelon, Almeria's second most important agricultural product
The manager of Coexphal, Luis Miguel Fernandez presented the forecasts for this melon and watermelon campaign. “According to the estimates compiled from Coexphal companies, watermelon production in the entire 2021 cycle will increase by nearly 3%, with a clear trend towards the black seedless variety (which will grow by 4%), as the white seedless variety will remain stable. Mini sizes will also have relevant increases of around 7%. We expect the organic production will grow by 6%.”

"According to forecasts, melon production will drop by 3%. Only the Cantaloup and Piel de Sapo varieties will present growth. We expect a decrease in the production volume of the Galia and Yellow melons, even though they still occupy the largest proportion of the surface area. The organic product will fall more than the conventional product, as we forecast it will fall by close to 10%.”

The forecasts for the melon and watermelon campaign may change depending on what happens throughout spring, so they should be taken with caution.

SANDI, the taste of summer
SANDI, the character who gives visibility and prominence to the watermelon in all communications and posts on social networks, is relying on the 'The flavor of summer' slogan and the hashtag  #LaPrimeraSandíaEuropea.