The three-week average price for yellow bananas in the EU member states stood at about €119 per 100 kgs in the last week of April. 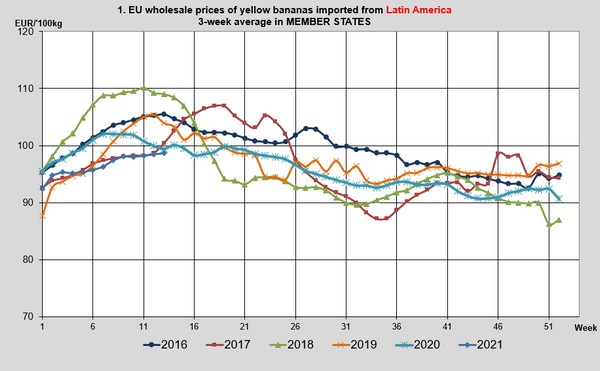 The ten eastern countries of the EU -which take in approximately 20 % of European banana volumes- have seen their apparent consumption increase by 200,000 tons in just the last 5 years. Poland remains the block’s biggest consumer, with a constantly rising apparent consumption, breaking the 430,000-tons barrier in 2020. The country is now the leading importer/exporter in Eastern Europe.

Although historically the Polish supply was mainly provided via Western Europe (Germany, Belgium, the Netherlands), since 2017 direct imports have overtaken imports from other Member States. In 2020, 52 % of the supply was imported directly Latin America, with an increasing share from Colombia, which overhauled Ecuador for the first time.

After a period of strong growth, Romania seems to have reached a consumption plateau of around 160,000 tons since 2019. The Czech Republic, one of the smallest East European markets, is yet to see any transformation. Consumption has remained stable at around 130 000 t for the past 4 years, and the import origins have been unchanged for several years.