The U.S. Census Bureau's bulk, intermediate, and consumer-oriented (BICO) export data tracks U.S. food and agricultural trade shipped directly to Poland. However, it does not measure the substantial levels of the U.S. agricultural trade to Poland routed through Western European ports of entry. 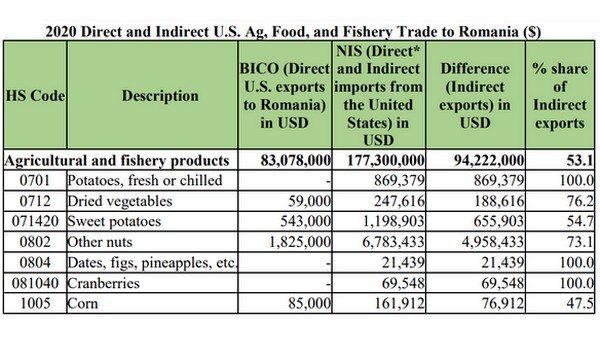 The United States is Poland’s 17th largest supplier of food and agriculture. U.S. goods flow into Poland either directly from the United States or are transshipped through the other European Union (EU) ports of entry mainly in the Netherlands and Germany.  Because BICO data only reflects direct U.S. trade to Poland, it does not reflect significant volumes of U.S. trade routed through distributors in Rotterdam, Bremerhaven, and other large Western European port cities. As a result, Post views Poland’s CSO data, which includes both direct and indirect trade, as a more accurate reflection of Polish demand for U.S. food and agriculture.

According to CSO data, Polish importers sourced $506 million worth of U.S. food and agricultural products in 2020.

For tree nuts (fresh or dried), BICO data captured $1.8 million, while NIS data show $6.7 million of U.S. tree nut imports. Most U.S. tree nuts, such as almonds and pistachios, are shipped to Romania through Germany.