Since recently, domestic offers had a firm grip on the asparagus market. Their presence clearly expanded. The spring-like weather intensified the demand. Nevertheless, availability was too great in some places, so that traders had to lower their prices if they wanted to avoid stocks. But there were price increases as well: In Frankfurt, for example, prices initially rose before falling again slightly towards the weekend.

In Munich, a shortage of supply led to rising prices; the quality of supraregional products there was not consistently convincing. In Cologne, prices fluctuated on a daily basis, but overall were unable to maintain their level of the previous week. Greek supplies arrived - particularly in Berlin - and were at most of a supplementary nature on other sites.

Dutch spears appeared as well, but only in Cologne and Berlin. In the case of green asparagus, domestic shipments grew strongly. The items cost a maximum of €6.50 per 500 g bundle in Frankfurt and €14 per 1 kg in Berlin. Demand was friendly and could be satisfied without difficulty. Imports from Spain and Italy completed the scene, but were somewhat neglected by customers, provided there were sufficient domestic goods. 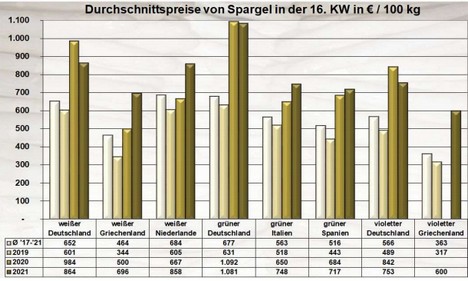 Apples
Slowly, the supply situation with domestic batches narrowed. The demand could still be fully met, but it was obvious that the season was gradually coming to an end.

Bananas
Customers were accessing in a regulated way. Availability harmonized with the sales. Nevertheless, there were frequent increases in price.

Lettuce
Belgian products predominated over domestic ones for lettuce. The supply of domestic items expanded, which had an impact on the prices.

Cucumbers
Domestic offers outweighed Dutch and Belgian ones. Availability had apparently expanded. Demand could not keep pace with this. Prices fell as a result.

Tomatoes
A diverse range was available, dominated by TOVs. These came mainly from the Netherlands, Belgium and Italy. Their presence had grown and traders often had to reduce their prices if they wanted to avoid surpluses.

Sweet peppers
Dutch deliveries dominated over Spanish and Turkish. Supplies had expanded, and demand could usually be met without effort.