What does the European Union Green Deal mean for the fresh produce industry?

Understanding and working within the European Union Green Deal was the topic of this week’s PMA Virtual Town Hall.

By successfully implementing the EU Green Deal, Europe will be the first climate-neutral continent by 2050. To get there, plans include cutting emissions by more than 55 percent by 2030 and that means the produce industry will have to work within those policies to remain compliant and profitable.

“Improving sustainability is becoming an increasingly essential aspect of all businesses,” said Lianne Jones, PMA’s country manager in Southern Africa. “Not meeting the minimum standards with respect to environmental impact may inhibit or at worst prohibit you from importing into the EU. It is in your best interest to not just meet the requirements and standards, but rather to get ahead of the curve and champion it.” 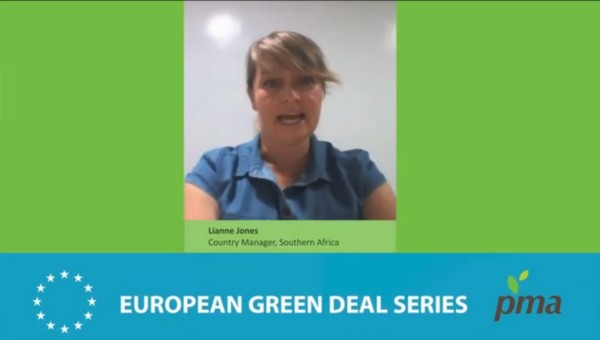 Here’s more of what was touched on in the session.

“The EU deal is a new growth strategy that fundamentally looks to grow the economies but to do so in a way that’s coupled with resource use,” said David Farrell, co-founder Blue North and senior associate Cambridge Institute for Sustainability Leadership, who began the session with a broad look at the deal. “It’s intended to address environmental sustainability issues more broadly, including the protection of natural resources and natural capital.”

Multi-pronged approach
The policies include several aspects of climate-related change including supplying affordable and secure energy, mobilizing the industry with a clean, circular economy, preserving and restoring ecosystems and biodiversity, building and renovating in a resource-efficiency way and much more.

To get there he notes that several key enablers are written into the deal which include pursuing green finance and investment, the greening of national budgets, mobilizing research and fostering innovation and other initiatives. “These are written into the deal understanding that the changes required are significant and going to be required on a number of fronts,” Farrell said.

Of interest to those in produce would especially be the Farm to Fork strategy at the heart of the deal. “This will prepare a road map towards fair, healthy and environmentally friendly food systems,” he says. “This isn’t just about agriculture within the EU. But those food systems and supply regions in the world that supply into the EU and are being embraced under this policy framework.”

Part of the Farm to Fork strategy includes looking at how to motivate financial institutions to support the right climate-action friendly investments. 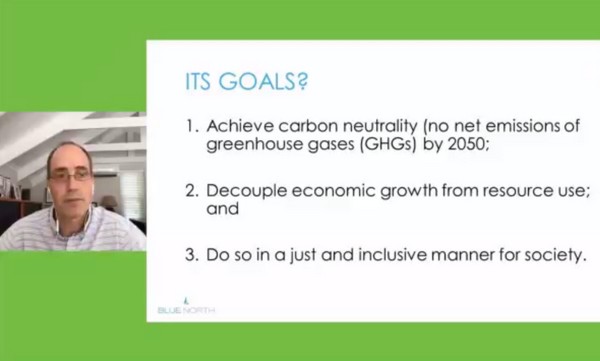 The meaning of Farm to Fork
The broad implications of this particular strategy include initiatives such as a proposal to avoid/minimize placing products related to deforestation and/or forest degradation and disallowing imported foods that don’t comply with EU environmental standards into the market. “The EU will require increasingly sustainable practices by trading partners, particularly related to plant protection products based on pesticide use. And the EU will also promote initiatives improving consumer information including an EU sustainable food learning framework and environmental footprint calculation efforts,” said Farrell

The key take-aways? “The Green Deal has core implications for agriculture products and supply chains. It will bring greater focus on agricultural practices and impose more requirements on farmers. But it will also bring opportunities,” said Farrell.

Frédéric Rosseneu, Belgium-based corporate business development manager for Greenyard, followed up with a closer look as to what this all means for the agriculture industry. He notes while the Farm to Fork strategy is the main element touching on the food chain, the circular economy action plan will also have an impact as it looks at packaging and food waste. “This will put pressure on the use of plastics and single-use plastics but also on non-recyclable packaging materials,” Rosseneu said. “It’s already a target by 2030 to have only recyclable packaging but also part of that will be additional criteria to have a minimum amount of recycled content in the packaging.”

Rosseneu also touched on the role of organic farming and increasing it, a clear policy goal in the deal. “The ambition there is to reach at least 25 percent of the EU agriculture land under organic farming,” he said. “Whether that’s possible for the fresh produce industry remains to be seen as it is quite an intensive industry and there’s already a major uptake of organic produce within our sector.” Outside of organic farming, looking into other methods of sustainable production and making sure these are being both adopted and demanded by customers are also part of this initiative.

Working with consumers
Consumer education is part of this and it touches on not only educating consumers but also the role of packaging and a sustainable food labeling framework to be carried out by 2024. “We must be sure we have the necessary systems in place to decide how we communicate our sustainable food performance. We should be working this on today,” Rosseneu said.

EU biodiversity strategy is also of note. “It tackles the use of fertilizers and pesticides and not only looks at which kinds of pesticides we’re using but how we’re using them,” he says. In all, the EU wants to cut pesticide use by 50 percent by 2030.

What he says is also encouraging as part of the deal is that there’s a clear reference in promoting plant-based foods. “It’s an overarching goal which is clearly visible in some initiatives but will play a role later on I’m sure,” said Rosseneu .

In the end, Rosseneu said the Green Deal is a road map in tackling many different initiatives and priorities coming in the next decade. “It’s important to bear in mind that this is all work in progress. It will be another three or four years before we see the first elements being applicable throughout the EU,” he says.