As President Cyril Ramaphosa was visiting the port of Durban (a visit that heartened him, he said), Transnet Port Terminals (TPT) was discussing its reefer readiness for the upcoming season with industry stakeholders. Transnet expects a 10% overall increase in demand for reefers this season (15% in Durban) and has augmented reefer plug capacity at all terminals, which all have dedicated power supply and reliable backup systems.

“This season we're going to have some difficulties, we have a massive citrus crop coming down to the ports, so it's going to require some cool heads and a lot of close cooperation between Transnet and the industry,” Justin Chadwick, Citrus Growers' Association, noted at the meeting. The CGA has set up a technical helpdesk for the industry to keep the wheels turning. Their forecast is that at Durban harbour, 1.1 million pallets of citrus will arrive, and a total of 2.1 million pallets at all of South Africa's ports.

“The upside is if we do make it work – we all know the need of the economy for foreign earnings and employment.” 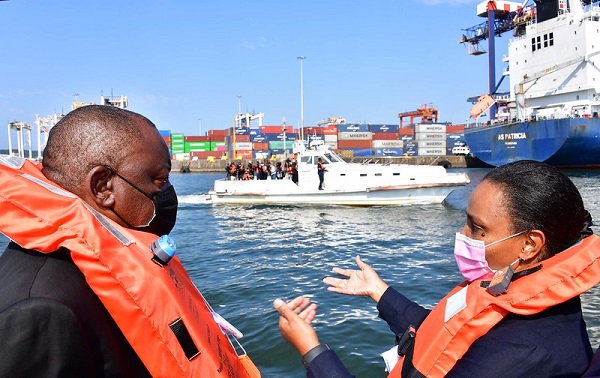 President Cyril Ramaphosa and the CEO of Transnet, Portia Derby, at the port of Durban (photo: GCIS)

The logistics development manager at the CGA, Mitchell Brooke: “The estimates coming in from the focus groups tell us we're going to have a very interesting year on our hands. An estimated export crop of 162 million 15kg equivalent cartons will create demand for 95,000 containers (FEU). Add to that, the balance of reefers required by the deciduous and subtropical industries (28,000), and it's been calculated that the South African fruit industry will be in need of 123,000 FEUs from now until October.”

“We're seeing the lines are bringing in containers and we'll keep communicating to ensure there are sufficient containers available for the coming season.”

South Africa also has a record maize (corn) harvest and two million tonnes of maize will have to be exported this season from Durban, alongside the fruit (although not competing on reefers).

Transnet has attempted to implement a more customer-friendly approach to manage the stacks, aligned to vessel arrival. They reserve the right to limit the stack occupancy to 85%, the meeting was told.

Durban: optimal cold storage & vessel berthing capacity
“What we've seen, particularly in 2020, is a convergence of late navels, late mandarins and Valencias to create a production peak between weeks 26 and 34. The whole infrastructure capacity will be tested during that period and we'll need all hands on deck. We're a bit concerned about container availability at Durban port during this massive peak, but specialised reefer vessels are to be deployed to balance the demand on containers over this period."

Most cold treatment containers will go to Durban Container Terminal's Pier 2, where an additional 22 straddle carriers will be in use by the end of July. Mitchell noted a possible increase in steri-box/COT shipments to China, Japan, South Korea and the Philippines this season. DCT will during the citrus season reduce the time that frozen poultry imports from the USA and the EU can remain in the terminal to two days to make space for citrus.

The Northern region of South Africa, Zimbabwe and eSwatini are where much of the citrus growth will be coming from, amounting to an expected 89 million 15kg cartons (five years ago it was 56.5 million cartons) of which a projected 43.5 million cartons will be Valencias and 14.4 million cartons of grapefruit.

“Durban container vessel berthing is probably the most optimal it has ever been,” he said, adding that cold storage capacity at Durban was also looking very good. A limiting factor to the citrus season at Durban is the availability of reefer trucks with Genset units.

He advised more KwaZulu-Natal cold stores to have reefer staging areas outside of their facilities to pack containers and plug them in ahead of stack dates to ensure continuity. DCT's Pier 1 and Pier 2 will have five stack days (three days at Durban Point Terminal).

At DCT the plan is to introduce a separate reefer truck lane, creating more fluidity for reefer containers entering the terminal.

Barge could be “a massive game-changer”
The good news is that the plan to introduce a barge to Durban harbour (originally proposed by FPT Group managing director Paulo Franco) is taking shape: the Transnet Ports Authority has agreed to issue skipper licences to operate a barge system.

“When a deep sea vessel comes into Durban to berth at pier 1 or 2, containers can be taken by barge to a depot to be cleaned and prepped, then staged and packed at MFT or FPT, put back on the barge which takes it back to the deep sea vessel, without making use of road transport and without having to leave the port precinct,” Mitchell explained.

This is one of a number of decongestion projects at Durban port.

From the Eastern Cape is expected just on 44 million cartons this year, from 32.5 million citrus cartons five years ago, with its peak expected between now to week 26. At Ngqura Container Terminal and Port Elizabeth Container Terminal the stacks remain open for four days.

Cold store capacity at Ngqura Container Terminal (NCT) is also optimal, which is very encouraging but could be constrained if vessels are delayed.

Vessel berthing in the Eastern Cape ports has him a bit concerned, Mitchell said. Additional vessels now calling at Coega instead of at Port Elizabeth will put strain on available plug points and truck throughput levels at Coega.

“It is expected that Eastern Cape citrus will be diverted to Durban and Cape Town to access certain markets and certain services,” Mitchell said. The CGA will monitor this activity to ensure it does not congest the ports of Cape Town and Durban.

Cape Town container vessel berthing also under pressure
“Cape Town has come out of a very bad period, it sorted out the issues and it's working nicely but potentially there's going to be some berthing pressure when some of the vessels from services that bypassed Cape Town, potentially come back onto the schedule,” Mitchell cautioned.

On the bright side, Cape Town Container Terminal's reefer capacity and cold store capacity tend to be surplus in the citrus season, with the added bonus that wind doesn't cause the disruptions it causes during the grape season.

“Why is this is our nemesis? Because those two ships move at least 60% if not more of South Africa's fruit going to the EU, UK and Russia. To as best as possible have a gap between the stack dates would be ideal. Overlapping stack dates cause a surplus demand at cold stores, it's virtually impossible for those facilities to keep up with demand and it places a lot of pressure on the transport system, depots and eventually the terminals.”

Transnet noted that it had planned for those stack dates not to overlap at this stage, but that the situation was fluid.

Rail transport of citrus
Transnet Freight Rail shared that it would provide seven reefer sets between Durban and Gauteng/Limpopo during May and June, with additional security measures to curb cable theft on the railway lines. A helicopter will patrol the hotspots with increased security on the trains.

There were a lot of good developments to increase the footprint of rail to alleviate the demand on road transport - which is going to be significant, Mitchell remarked.