The European white grape market is currently grappling with delayed volumes. These are arriving from India now that the Suez Chanel blockage is resolved. "As a result, we're getting more volumes than planned. So we can make good use of all marketing opportunities within the retail sector," says Eddy Kreukniet of Exsa Europe in the Netherlands.

He says the delays have had little effect on the grapes' shelf life. "In India, grapes are developed for longer transit times anyway. They, therefore, sometimes have lower sugar content but an excellent shelf life. In this case, that's a nice advantage."

Great interest in red grapes
"The interest in particularly red grapes, however, has skyrocketed. It's been rising anyway. But, in the past two years, more consumers, especially, prefer red grapes. These are now on the market in top form - in volume and great varieties. That, while at the same time, there's actually a somewhat lower interest in white grapes. That's a little concerning for the Indian grape market in the long run," says Eddy. 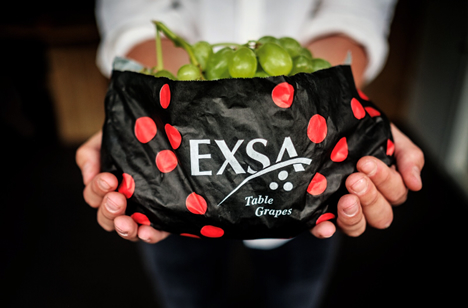 "India is currently dominating the white grape market. There are only a few alternatives. These include Autumn Crisp and Sweet Globe from South Africa. And the Arra-15 from the Brazilian mid-season. These are the better varieties. However, they don't have the volumes needed to serve the larger supermarket chains. But these varieties are a great option for smaller retailers."

"Concerning red varieties, it's mostly South Africa grapes. These are supplemented by smaller Chilean volumes. The volumes from South Africa will drastically decline in the coming weeks. Chile is sending considerably less than expected. That's because of rain damage. That country, however, sent a lot of grapes to the United States and Canada when the season started. Those markets are now saturated, so more volumes are coming to Europe," explains Kreukniet.

Promising Egyptian season
White grape shipments from India are just about done now. "We always stop earlier with India anyway. Otherwise, these hinder grape sales from our vineyards in Egypt. The Egyptian season is looking promising. Last year, Egypt had one of the latest seasons ever. This year, it'll start roughly on average for the long term."

"But, there's a drawback this year. It starts in week 19, which coincides with the end of Ramadan. You want to start packing at full speed then. However, all of Egypt will be celebrating Eid al-Fitr. That complicates things a bit," continues Eddy.

"We're expecting ten to 15% higher yields. That's across the entire Egyptian line, but especially in the new varieties. These are varieties like Sweet Globe and Sweet Celebration. But also Melody and Starlight. Things look very promising. The new IFG varieties will come into full production at our vineyards. We used to have a limited range of traditional varieties. Now, we'll have a broad one with many new varieties and flavors."

"This will, however, affect the whole window. Egypt used to have a short, intense five to six-week season. Now, I think we'll keep going until the end of July. The question is whether the market will opt for the late Egyptian varieties. Or will they want early European grapes? These are often harvested too early to take advantage of a favorable gap in the market gap. I'm sure quality will win out in the end," Eddy concludes.