Out-of-season frost has caused great damage not only in northern Italy, but also in the rest of the country. The umpteenth harsh drop in temperatures between April 8th and 9th affected Basilicata, Campania, Apulia and Calabria as well, damaging stone fruit, kiwifruits and vegetables.

Basilicata
"We knew a cold front was coming, but we would never have imagined anything like this, once again. Temperatures dropped to -2°C, with unavoidable consequences for crops. Stone fruits were the most affected, we still do not know the extend of the damage, but groves definitely do not look like they should in spring," commented Franco Lillo, field technician at AOP Arcadia.

"Some apricot batches (Pricia, Mogador, Flopria) have been completely destroyed. Fruits have blackened also due to the sudden rise in temperatures only a few hours after the drop. Inland plains were the most affected, whereas a lot of the crops seem to have survived in ventilated areas and near the cost. For some growers, it will be much more than 'natural thinning'. As for peaches and nectarines, we will have to wait a few days to better assess the damage. Kiwifruits, watermelons and melons were also affected, while strawberry crops have not been damaged." 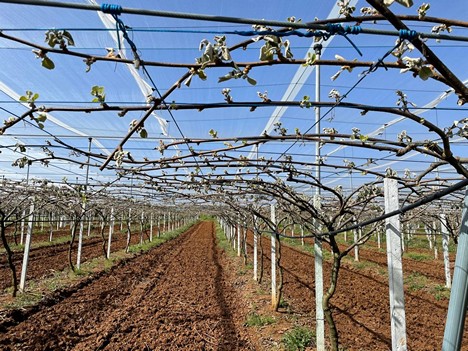 Apulia
Considerable damage was registered in Apulia as well where, in the Foggia province, temperatures dropped to -5°C. Almonds and cherries are the most affected, though things look worrying for table grapes, asparagus, eggplants and potatoes as well. 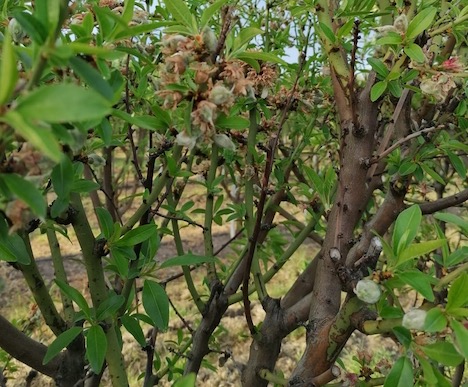 Intensive almond groves at Soc. Coop. Agricola Giardinetto, located in Orsara di Puglia (FG), have been heavily hit. The groves cover around 100 hectares and already had to deal with the three consecutive frost events in mid-March. Now they have been hit right during blossoming.

Giosuè Del Vecchio, counselor for agriculture for the Rignano Garganico municipality (FG) and owner of Fratelli Del Vecchio, a company producing pomegranates and almonds, declared that "around 90% of the almond production at Cooperativa Giardinetto was lost. I assume the damage to the 400 hectares in Capitanata is similar. This last drop in temperatures has affected thousands of hectares of orchards, asparagus crops, vineyards and other crops. I am sure local wheat will be affected as well. We will now have to assess the damage to see whether there are the grounds to declare a state of natural disaster."

Part of the organic asparagus crop at Prima Bio, a cooperative located in Rignano Garganico and producing mainly organic broccoli and asparagus, was lost. "We lost around 20% of the production on 20 hectares. It is still not possible to estimate the total damage on our 2,000 total hectares. We usually start harvesting in mid-March but, due to the weird temperatures, we have reached mid-April and have harvested only 10% of the produce. Of course prices are high due to the lack of volumes."

Campania
As if the frost of April 8th was not enough, another occurred the following day affecting stone fruit, top fruit and vegetables. 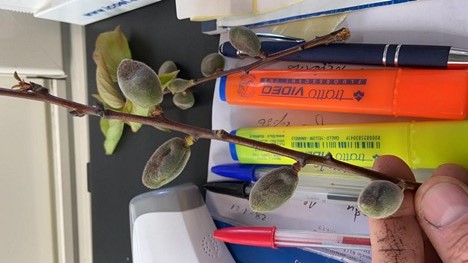 "The areas mostly hit are Caserta, Acerra, the area north of Naples and the coast. During the night of April 9th, the temperature dropped to -4°C in the south Caserta area. In San Tammaro (Caserta), where I own 10 hectares of pear groves and peach orchards, the frost left its mark. Coscia pears were the most affected and the situation is looking dire for peaches as well. It is still early to assess the damage, but I  believe the Italian stone fruit campaign has been prejudiced. We are asking the authorities to intervene as the produce has been damaged and it is difficult to employ labor," explains Giuseppe Ceparano.

Potatoes, industrial tomatoes, artichokes, broad beans and peas have been heavily damaged, as have plums and apricots. 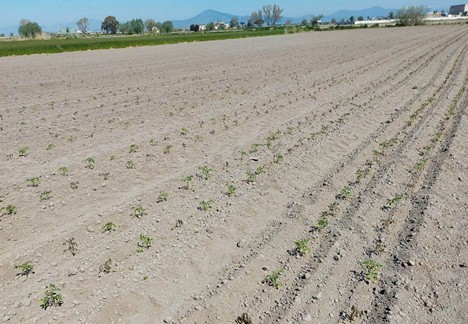 Discouraging news is coming from Villa Literno (Caserta) regarding industry tomatoes. Nellino Tamburrino reports that "entire crops have been totally destroyed due to the sudden drop in temperatures, as we reached -4.5°C. We need to transplant everything again. I believe the campaign has been prejudiced, despite the existing contracts. We will now have to understand how many plants nurseries have available and are expecting a delayed production by at least 30-40 days with higher production costs. We have currently stopped transplanting to avoid further damage."

Calabria
Winter has returned to Calabria after the extreme weather events registered already in mid-March. Now strong winds and snow have been registered in the Cosenza and Crotone provinces, even in areas little over 500 m asl.

In the Sibari plain, specializing in the production of citrus and stone fruit, temperatures dropped to -3°C in some areas. Apricots and pomegranates have been damaged, but it will take a few days to make an assessment.