Anecoop presents its watermelon campaign, increasing its acreage and aiming to exceed 155,000 MT

The Spanish growers' association Anecoop has officially launched the new season of one of its top products: the Bouquet watermelon, which was the first seedless watermelon to hit the European market in 1992. Today, almost three decades later, it still leads the pack in its category across Europe.

This year, the second-tier cooperative and its member growers participating in the Bouquet watermelon program want to reach consumers with the message "Portions of emotion," thus following up on last year's campaign, whose slogan was "A portion of life for the field". With it, it is recognizing the essential role of growers and the importance of the rural environment. 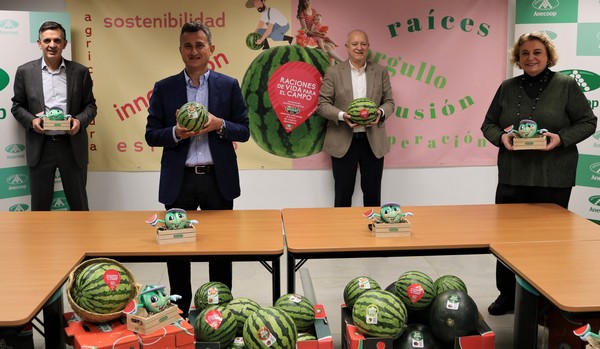 Anecoop has already shipped its first watermelons, but the market is currently very quiet due to a cold front in much of Europe.

"Last year, we once again broke our record, despite a difficult start to the season due to lower yields (because of unfavorable weather conditions) and market uncertainty during the worst weeks of the lockdown. Fortunately, 85% of our watermelons go to the retail, so the drop in the demand from the hospitality industry didn't really affect us," says Miguel Abril, commercial director at Anecoop. "This season, we expect to sell about 155,000 tons in 29 countries. We will also see great growth in organic watermelons, of which we expect to market more than 10,000 tons."

Within the Bouquet range, the Premium Bouquet was launched last year, targeting high-end markets. "This new watermelon was well received, so we made the decision to double the production and go from two to four million kilos. Last year, it was only available in the wholesale channel, but this year we also have agreements with two large supermarket chains, one in Spain and one in Germany." 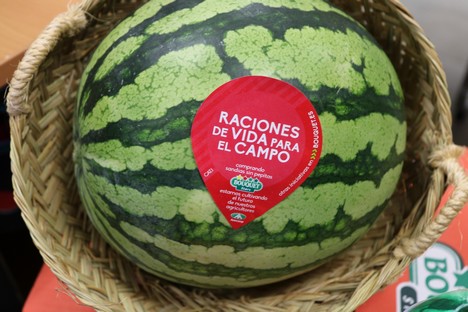 "At the request of our customers, we have also doubled the planting of black seedless watermelons, which will allow us to supply more throughout the season. Nevertheless, the striped seedless watermelon remains our flagship product, accounting for about 65% of our total production."

Yellow watermelon sales were hardest hit during 2020, as most of this fruit's volumes go to the catering industry, especially in Germany and the Nordic countries. This is the watermelon of which Anecoop grows the lowest volumes, and its acreage, incidentally, has also not increased in recent years.

Remarkable expansion of the acreage in Almería and Castile-La Mancha
The first Bouquet watermelons are harvested in Almería in April, including those of Hortofrutícola Costa de Almería, which joined Anecoop at the end of last year. After Almería, it will be the turn of Murcia, Alicante, Valencia and Castellón, and finally Castile-La Mancha.

"Our watermelon acreage has increased by 15% this year. This applies mostly to the early crops in the greenhouses of Almería and to the late ones in Castile-La Mancha. This serves to meet the increasing demand for watermelons in the months of August and September."

"We know that in April, when we start in Almería, there will still be Senegalese watermelons on the market. This year, the overlap will be even greater than usual due to logistical problems, which have led to considerable delays in the loading. However, it should be noted that the quality of the Senegalese watermelons is suffering because of those delays. We are 100% committed to the Spanish production and it is important to be present on the market from the very beginning; and the longer, the better," says Miguel.

Anecoop has started selling premium Piel de Sapo melons
Miguel Abril also says that this year, Anecoop will be giving Piel de Sapo melons a stronger push, after growing just timidly over the past few years. "The strength that Bouquet watermelons have given us and the demand from some customers has motivated us to offer our black label Piel de Sapo melons to specialized wholesalers and to some retailers. For now, we are only doing this in the Spanish market. We are starting with a modest production of 2,000 tons. The idea is to see how consumers react."

"We appeal to consumers' emotions"
Anecope's president, Alejandro Monzón, described last season as a historic one. "We managed to achieve a perfect balance with our work. Our heart went out to each household, but our head was fully focused on the land we cultivate. Emotions and reason. Thus, with our slogan "A portion of emotion," we appeal to the emotions of a consumer who has had to deal with a lot of "gray and black portions" this year. The campaign for our top summer product, the seedless watermelon, therefore aims to capitalize on the basic emotions that we have so often had to miss over the past year."

Since 1992, Bouquet watermelons have been present in the fruit section of many major European supermarket chains. "The Bouquet is an internationally recognized watermelon brand. It is linked to some very defined values about the way to grow and innovate in a sustainable manner, taking into account not only consumer preferences, but also the day-to-day reality of the people who work in the fields and make their living from them," says Joan Mir, general manager of Anecoop.

Promotional campaign
Marketing manager Piedad Coscollá says that the company will carry out an intense communication and marketing campaign which has required an investment of 850,000 Euro. The campaign will be conducted mainly in Spain, France and the Czech Republic, with advertisements in the press, both for the general public and in professional publications, on radio and TV, via podcasts and social media. There will also be aerial advertising over Spanish beaches and collaborations with various European supermarket chains. 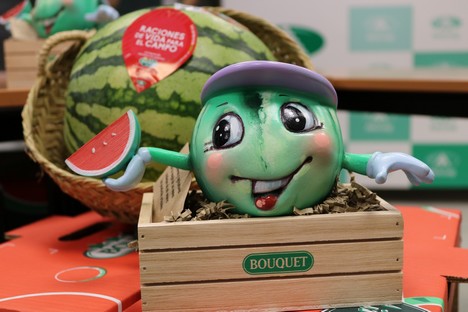 Moreover, two years ago, Anecoop launched a project to support inclusive sports, whose activity fell through last year due to the pandemic, but the company aims to continue strengthening this commitment.