In response to the unprecedented pressure on containers, Anlin Shipping has arranged one 'spot' specialised reefer vessel to visit Cape Town harbour, even before the planned start of their conventional service. 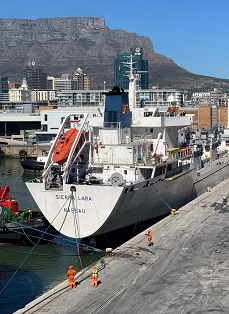 At the end of last month the Sierra Lara (right) loaded 2,200 pallets, of which 75% was grapes, the balance consisting of pears and plums for Portsmouth, UK, and Rotterdam.

“The whole idea is to alleviate the pressure in Cape Town harbour due to container delays and shortages,” explains Charles Gantz, managing director of Anlin Shipping, which is the agent for the Reefer Alliance, “and we have another vessel, the mv Baltic Purple, that will load from 18 to 22 April at FPT in Cape Town, to Rotterdam.”

He notes that their quick reaction time of 10 to 14 days can at times be shortened when a vessel is in the proximity of South Africa, adding that for the deciduous industry they had planned to cover one or two strategically positioned specialised reefer vessels between weeks 4 and 9.

"This would have been to assist in facilitating a steady flow of shipping in what is normally seen as the peak period. This offer was, unfortunately, turned down, as things seemed to be under control from an exporter / grower point of view. Hopefully we'll be allowed another opportunity to sit down with the deciduous industry and collectively structure a workable solution for all parties going forward."

The Reefer Alliance’s planned service starts from Durban in week 16, loading weekly from Durban, Port Elizabeth and Cape Town for the UK, Europe and Russia. “Usually our specialised reefer service starts by week 17 or 18, but this year we're commencing a bit earlier because of current inefficiencies, equipment shortages and larger volumes expected.”

The Western Cape citrus programme, serviced by Seatrade to North America from Cape Town, will kick off by the end of week 20.

Requests to include Middle and Far East
When fruit has been packed to the hi-cube model or into a hi-cube container, it's very difficult to change plans to rather send conventionally. “The fruit that was loaded onto the Sierra Lara were committed to conventional shipping because of the bottlenecks in the system, like cold stores being blocked out.”

There are a significant number of requests to include the Middle East, Far East and even Bangladesh in their service model, he notes, and it's something they're investigating, but there are no immediate plans (vessels are currently in rather short supply worldwide, he notes).

Years ago their vessels went between South Africa to South Korea and Japan. Today still, specialised reefer vessels play an important and strategic role in servicing a citrus programme to Japan and China from Durban, operated by Cool Carriers.