Imperial Valley is gearing up for onion harvest

As California gears up for onion harvesting, steady, if not increased, supplies are anticipated.

“We are getting ready in the next couple of weeks to harvest our El Centro crop in the Imperial Valley. That usually starts with a good healthy supply of yellow onions,” says Jessica Peri, retail sales manager at Peri & Sons Farms in Yerington, NV. “Then around May 1st you’ll see reds and whites available and we’ll be in full production.”
While this harvest is a few days later than projected says Peri, she notes for the season overall it’s on track.

Acreage also seems to be up. “Overall the growing conditions are pretty good with no major issues so I think we’ll see the same volume, if not a bit more, than in years past,” says Peri. 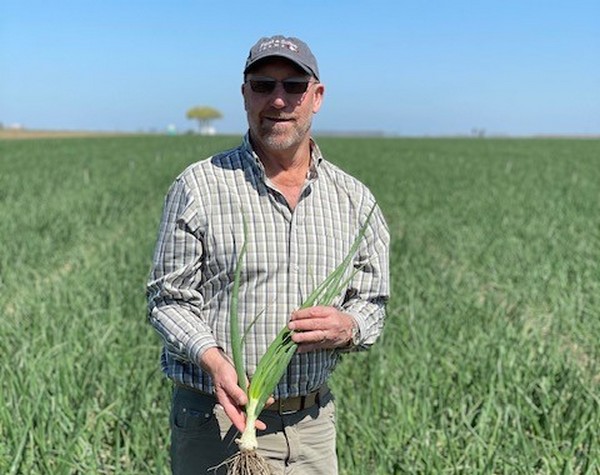 David Peri of Peri & Sons in an overwinter field in Firebaugh, CA. That onion will reach maturity in about six weeks.

Competing supplies
Other regions supplying onions at this time as well are the Northwest and California also tends to overlap somewhat with Texas. “Arizona’s crop also starts towards mid-May. But that has been declining in acreage over the years. Baja California pretty much runs the same time as El Centro,” she says. El Centro production goes until approximately the end of May after which Peri & Sons transitions to the San Joaquin Valley for supplies.

In terms of demand, Peri believes it will at the very least be steady. “I anticipate retail demand to remain strong and foodservice demand to increase as restaurants are operating at greater capacity,” she says.

And given the Texas freeze that happened in February, Peri thinks there’ll be no extra pressure on California supplies following that storm. “I thought the Texas crop would be more impacted than it actually turned out to be. There are still onions. Yields are down but they’re still available,” she says. “They pulled through the freeze pretty well but I think the sizing profile will be much smaller than what a typical Texas onion will be which is more to that jumbo and large jumbo size. The freeze just seemed to halt the growth of the onions.”

As for pricing, Peri believes it to be average given the presence still of Northwest onion supplies. However, she adds that high freight rates from all areas should be expected.