This week’s PMA virtual town hall featured speakers from the foodservice industry and examined how the foodservice industry has been bouncing back in recent months. Peter Rosenberg, Director of Operational Support at Texas Roadhouse, Brandon Stewart, President and CEO of Starboard Investments and Franchisee of Jimmy John’s, and Kristie Waters, Vice President of Sales – Western Region of Pro*Act discussed changes that have been made in the past year, how the new year has gone so far and expectations for the future. Joe Watson, PMA’s Vice President of Membership Engagement, led the panel in their discussion. 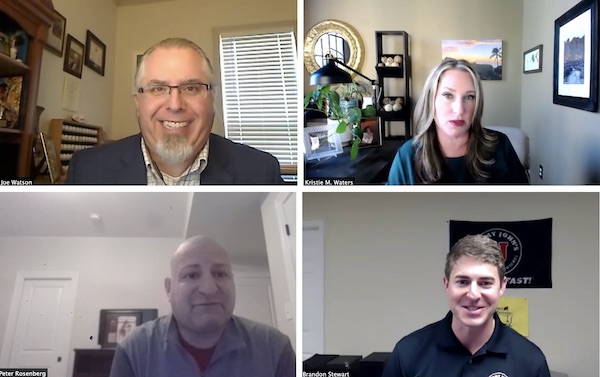 Great Q1 of 2021
The first quarter of the year has just wrapped up, and the numbers that both Rosenberg and Stewart have seen so far this year have been looking very good. “We started to see a change at the end of February,” Stewart says. “I don’t know if it’s due to the vaccine becoming more widespread or because of the new stimulus but we have been seeing great sales. We haven’t really seen a return to normal in terms of sales distributions – we are still seeing much more residential region sales compared to downtown and college campus sales – but there has been a big overall pick-up in volumes,” he shares.

Texas Roadhouse officially wrapped up their first quarter on March 30th and while the official numbers won’t be released for another 3 weeks, Rosenberg shares that they have had a great first quarter. “Our sales were up in the first four weeks of Q1 compared with last year, and we expect that trend to continue. Foodservice industry as a whole is still not fully back to normal, mainly due to the hospitality and tourism industry still being depressed but for dining establishments the numbers have been looking good,” he says.

Changes and challenges
One of the biggest changes for Texas Roadhouse has been the shift from in-person dining to takeout orders. “Prior to the pandemic, only about 7% of our business was to-go. Then during the first few weeks of the pandemic that went up to 100%. It’s now leveled off a bit and settled around 20%, but which is still almost triple what it was before the pandemic,” Rosenberg says.

Some foodservice establishments have also added new distribution channels to help bridge the gap in business that was created by the pandemic. “We’ve seen great success with businesses taking dishes from their menus and putting those in grocery stores through local partnerships,” Waters says. “We put our margherita mix in stores and also did an online workshop for the customers. We also offer to-go packs of fully cooked dinners as well as uncooked dinners that consumers can take home and cook themselves,” Rosenberg adds.

While these changes have all been extremely valuable and much of the business volumes are returning to near-normal levels, there continues to be challenges for the foodservice establishments. “By far the greatest challenge is the lack of available staff. We just can’t find enough people, it’s our number one pain point,” Stewart says. Rosenberg agrees: “We’re constantly running with tight crews and going into the summer with increased costumers, that’ll be our main challenge.” Waters is also seeing the same issue: “We have had to find out how to do more with less resources, and to run as lead as humanly possible.”


Future outlook
Watson asks the panelists if they have changed their menu based on the renewed consumer focus on health. “We are always looking to update our menu,” Rosenberg says. “We are working with Sunset Mastronardi on a baby cherry tomato test, we are working with Grimmway for carrots and with Church Brothers to add a new lettuce to our salad mix. While steak and potatoes continue to be the most popular items, salads are our most popular side, so we are continuously working on updating and innovating to give the consumers the freshest options.”

Mother’s Day is coming up, and this is one of the biggest days of the year for restaurants, Watson shares. Rosenberg explains: “Last year was the first year we offered Mother’s Day packages that customers could take home, and it was very successful so we will bring that back again this year for those people who aren’t yet comfortable with coming out to eat. But overall we’re preparing for a super busy day.” Waters adds: “There is so much excitement and positivity from everyone around the vaccines and the restrictions being lifted, and we believe the customer confidence will be at a high for the holiday.” For Jimmy Johns, the biggest customers during Mother’s Day are the restaurants themselves. “We cater restaurants who supply food for their employees during the busy day. So far, many restaurants we’ve spoken to are excited for that,” he concludes.