These Pacific Ocean countries' export assortments have similarities as well as differences. That's primarily due to their location. Peru lies close to the equator. Chile is a true Southern Hemisphere country. But there's a vast distance in climate between the country's north (20th parallel) and south (50th parallel). That allows for a great diversity of cultivated products.

In Chile, apples and pears are quite dominant. Together, these account for almost half the country's export share. For Peru, grapes and avocados are the big two. But these products' combined export share is less than 40%. Chile's numbers three to six are cherries, mandarins, kiwis, and plums.

For Peru, the top two are rounded out by onions, mangos, and bananas. Of the larger products, grapes are among both countries' top export products. Then comes blueberries for both countries. And Peru, just like Chile, exports a lot of avocados. 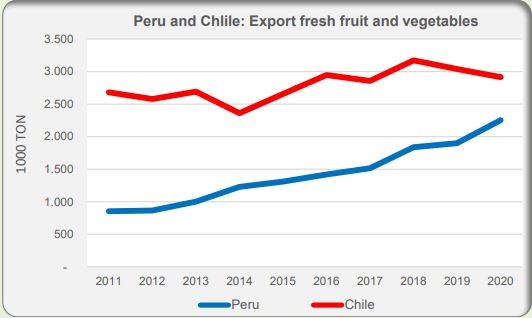 Most goes to the US
The United States is, by far, both Chile and Peru's most important sales market. In 2020, this country took 30% of Chile's fruit and vegetable exports. And 36% of Peru's. For Chilean exports, China was at number two. They sent a significantly large number of cherries there. The Netherlands is Peru's second-largest buyer. It's Chile's third-largest fresh fruit and vegetables market.

Chile: growth in less important products
There are, nevertheless, several growth products in Chile's export assortment. That doesn't apply to the top two products. Last year, Chile exported slightly fewer apples than in 2019. That amount was, however, much smaller than in 2018.

Proportionally, Chile sends many apples to Latin American countries. Exports to the Netherlands picked up again in 2020. That was after a sharp dip in 2029. But it didn't reach previous levels.

Chilean grape exports have long since reached their peak. Almost half of these are exported to the United States. China is the other major buyer. The Netherlands is far behind in third place.

Cherries are now Chile's third-biggest export product. In 2020, they exported a record volume of these fruits. This product goes almost exclusively to China. Last year was a top Chilean mandarin export year. Export increased by a quarter to nearly 200,000 tons. Chile sends virtually all its mandarins to the US.

Chilean kiwi exports also peaked a while ago already. This product's exports collapsed last year. They are, however, still sold in several countries. Global blueberry exports might be climbing, but in Chile, it's declining. In 2020, it decreased by as much as 20%.

Exports to the United States fell particularly sharply. This is, by far, Chile's most important blueberry market. The Netherlands is at number two. In 2020, the export of Chilean blueberries to the Netherlands grew to a record 25,000 tons.

Chilean avocado exports also declined significantly to its all buyers. That includes the country's top avocado sales market, the Netherlands. 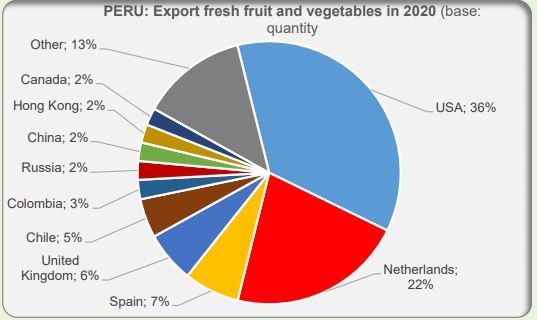 Peru's entire export range grew
Grapes are Peru's top export product. These exports grew substantially in the past year (+19%). Exports to the US even grew by a record one-third. Again, this country is Peru's most important sales market by far. Exports to the Netherlands also increased significantly (+18%). This country is Peru's second-largest grape buyer. Peruvian grapes exports to Southeast Asian countries fell sharply.

The Netherlands is by far the top destination for Peruvian avocados. This is the country's other main export product. Exports of these to the Netherlands grew by 30%. That's in line with the total increase. The Netherlands also buys most of Peru's mangos.

Peruvian banana exports were on a downward trend. That, however, didn't continue in 2020. Two-thirds of Peru's onions go to the United States. Spain is the second top buyer. Mandarin exports fared well too. The US takes more than 50% of Peru's mandarins.

Peru's blueberry export is developing rapidly. In a very short time, these exports have grown to more than 160,000 tons. Half goes to the United States and a quarter to the Netherlands.

Three-quarters of Peru's asparagus exports are destined for the US. As buyers, Spain, the United Kingdom, and the Netherlands lag far behind. In 2020, Peru exported 7,000 tons of asparagus to the Netherlands. 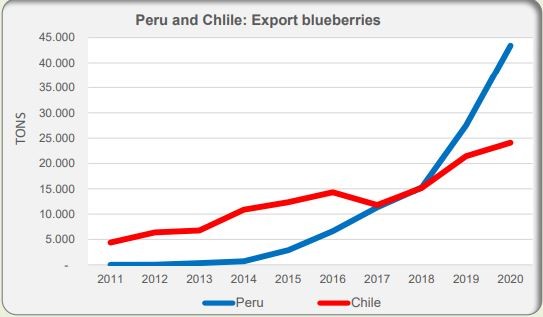 The EU gets more than 1.1 million tons from Chile and Peru
Last year, the EU27 imported almost 400,000 tons of fresh fruit and vegetables from Chile. They bought more than 700,000 tons of Peruvian products. That's according to Eurostat figures. For Chile, that was about the same amount as in 2019.

Almost 30% of all EU's blueberries from Chile and Peru
Last year, the EU27 imported a total of 1.1 million tons of fresh fruit and vegetables. That's from Chile and Peru together. That was three percent of total EU imports and eight percent of imports from outside the EU. These two countries' share is highest for blueberries. That was at almost 30% (61% of non-EU imports).