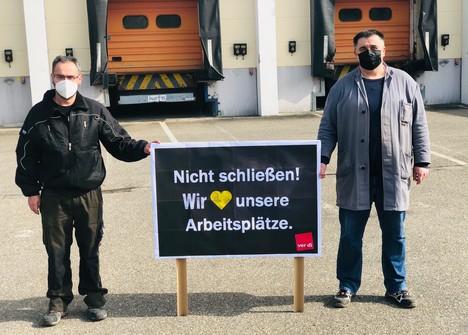 At the beginning of 2017, the jobs of the employees at the Nieder-Olm site (Rhineland-Palatinate) were secured for 5 years (moratorium) by ministerial permission granted for the merger between EDEKA and Kaiser's Tengelmann. The objective of the ministerial approval was, among other things, to achieve sustainable job security by ensuring the continued existence of the structures of Kaiser's Tengelmann operating sites. 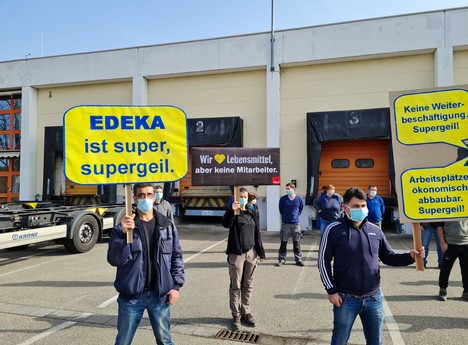 Sustainable concept missing
EDEKA had been ordered by the minister at the time to take over the structure and networks of all Kaiser's Tengelmann stores, setting them up in such a sustainable way that they could continue to exist and function economically even after the 5-year moratorium. "However, EDEKA has not kept its promises. The structure and networks of the Kaiser's Tengelmann company was dissolved, no sustainable concept was implemented in Nieder-Olm," says a spokesman for the demonstrators.

The central warehouse belonged to the entire Kaiser's Tengelmann company on the cut-off date (01.01.2017) of the takeover. At that time, it was part of "Kaiser's Tengelmann operational structure", supplying its approximately 450 stores in all regions of Munich/Upper Bavaria, Berlin/surrounding area and North Rhine with approximately 7,000 different items. "Three months after the approved takeover, in March 2017, EDEKA changed the existing structure of Kaiser's Tengelmann to the effect that the central warehouse would no longer supply its stores," the demonstrators commented. 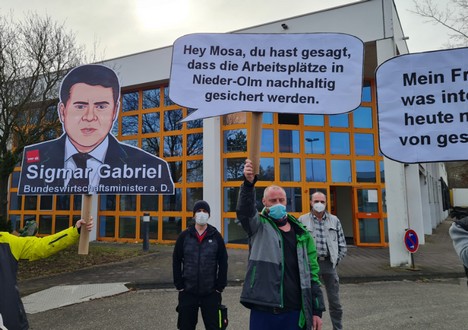 Sustainability and integration
"Due to the structural changes at Kaiser's Tengelmann, unilaterally decided on by EDEKA, without talking to the trade union at all, many employees of the central warehouse would not be employed for a whole year until April 2018. The colleagues were experiencing psychological pressure due to their non-employment to leave the company. Some left the company, some spent their days being bored or playing sports in the warehouse, or sleeping on pallets," Schmidt continues. 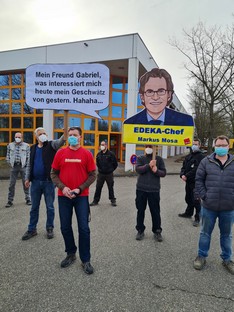 reported on the situation at the time, despite job security and guarantees provided by the ministerial permit that had been issued. Due to public pressure, EDEKA agreed on a service contract with EDEKA Südwest Gesellschaft and EDEKA Weinbergkellerei a full year later, in April 2018. "Sustainability and integration in the former Kaiser's Tengelmann network looks different!" is what the employees say.

The two service contracts were terminated as of Dec. 31, 2021, and the warehouse rental contract was not renewed as of Jan. 1, 2021, so it will have to be vacated at the end of this year. Landlord Logicor is currently looking for a new tenant for January 2022 and beyond. Logicor has put the 30,000 m2 central warehouse space up for lease on their website. "EDEKA did not use the time of the moratorium to set us up sustainably. Instead, they have 'run us into the ground', showing shown no interest in making a profit through our central warehouse," the protesters say.

Partial meetings as a last emergency measure
EDEKA is one of the leading retailers in Germany and, according to the staff, it would have been possible to run the warehouse in a sustainable and economically viable manner. "However, nothing sustainable was done and we were kept somewhat busy in the warehouse to keep us quiet. EDEKA just wanted to wait and see and bridge the time until the ministerial permission is over." 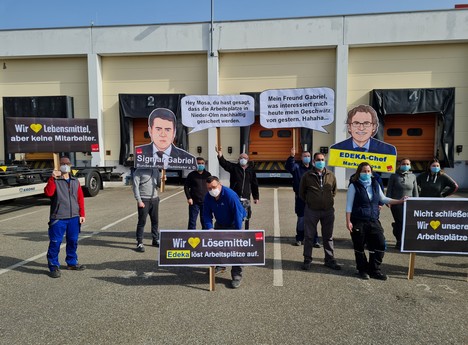 "The workforce is angry and disappointed with EDEKA's approach and behavior, because from the beginning EDEKA did not want to secure our jobs in the long term. That is why the employees went to protest outside during the partial works meetings to send their message to those responsible."