Australian banana growers who have lost up to 100 per cent of their crop to cyclonic winds are calling for urgent assistance from the Queensland and Federal  Governments.

In a devastating blow for growers already battling ongoing low prices and worker shortages, most Innisfail district banana growers are now looking at between 3 and 9 months without an income.

Boogan fifth generation grower, Charles Camuglia, lost all of his crop to extreme wind on March 1. 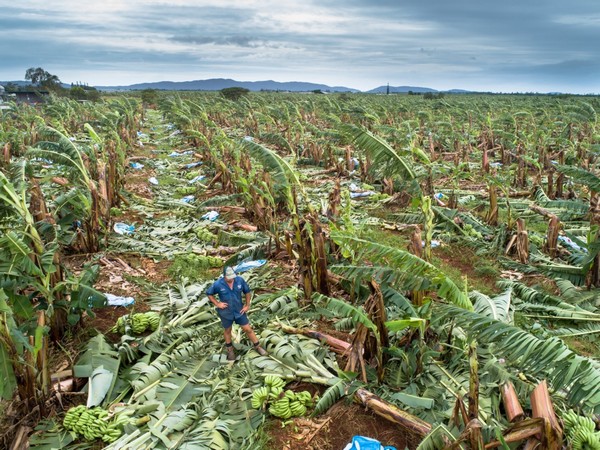 Grower Charles Camuglia surveys the damage on his farm. Charles lost 100% of his crop

“This is 100 per cent of our income,” he said. “It’s going to be hard.”
In addition to the clean-up and recovery, Charles holds very real concerns about being able to retain workers or find them once back in production.

“I’d like to see the Government step up and put something towards helping us growers keep staff through times like this. We’ve come off the back of a good 12-24 months of pretty average pricing, so there’s no money in the kitty to be splashing around.”

Stephen Lowe, chair of the Australian Banana Growers’ Council, echoed these thoughts and described the situation as a double-edged sword.

“These growers have been trying to get as many workers as possible – still not enough – and now they’re concerned that they won’t be able to pay them or find them again when needed. It’s an issue for sure.”

“What we really need is for Australians to go out and buy bananas to support Aussie growers,” he said. “It’s nature’s best snack and it even comes with its own packaging.”

Mr Lowe added that agriculture had helped hold the fort for Australia during the COVID-19 pandemic, keeping local produce on the shelves without a great deal of price movement. 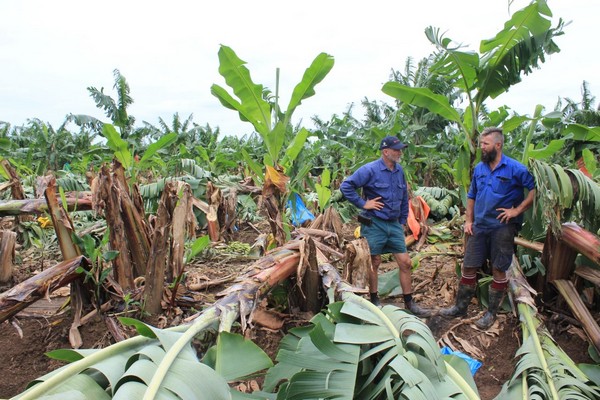 ABGC chair Stephen Lowe speaks to Tony Alcock, who lost 50 per cent of his hanging fruit in the storms

Now Governments are touting it as a pillar of the recovery effort.
“So we need the State and Federal Government to step up and give some assistance to horticulture for the workforce, and in the case of this weather event, particularly to the banana industry. It’s simply too big an event to ignore and we’ll keep putting the pressure on.”

An initial loss assessment was undertaken by the Department of Agriculture and Fisheries, assisted by the ABGC, this week. This will be considered by the Government to determine what sort of assistance can be offered. The ABGC is calling for growers to be considered for funding under the Disaster Recovery Funding Arrangements, in particular the Special Disaster Recovery Grants. These grants could help support retention of staff and in turn
have a positive impact on employees, contractors, families and the community more broadly. In addition, the ABGC is keen for the Government to provide worker retention assistance to the worst affected growers.

For Gurjeet and Kuldip Singh, that assistance will be the difference between them leaving the industry or rebuilding again.

“We need financial support to get us back on our feet,” Gurjeet said. “Farming’s in our blood. Before Dad came to Australia, he was doing it back in India. We don’t know anything else.”

“No income and trying to rebuild? It’s not possible.”
While the ABGC continues to advocate for growers, Mr Lowe emphasised the best thing Aussies could do for the industry right now is to keep buying bananas.

“Remember, we’ve had some rough times in certain parts of the growing area. If you see a banana on the shelf that’s got a slight mark on it, pick it up – it’ll still be great on the inside.”