An innovative contactless method for the timely harvest of soft fruits

In agriculture, there are many mechanical methods to indirectly measure a fruit’s ripeness through its firmness. However, most fall short for soft fruits, which do not exhibit the same types of measurable vibration as harder ones. Now, scientists from Shibaura Institute of Technology, Japan, have developed an innovative method to measure fruit firmness using laser-induced plasma shockwaves. Their contactless, non-destructive approach works on mangoes and should be useful for other soft fruits as well.

Most people are probably familiar with the unpleasant feeling of eating overripe or under-ripe fruit. Those who work in agriculture are tasked with ensuring a timely harvest so that ripeness is at an optimal point when the fruit is sold, both to minimize the amount of fruit that goes to waste and maximize the quality of the final product. To this end, a number of techniques to assess fruit ripeness have been developed, each with their respective advantages and disadvantages depending on the type of produce.

Although biochemical and optical methods exist, mechanical techniques are the most widely used. They indirectly assess ripeness based on the fruit’s firmness. In turn, firmness is quantified by observing the vibrations that occur on the fruit when mechanical energy is accurately delivered through devices such as hammers, pendulums, or speakers. Unfortunately, these approaches fall short for softer fruits, which are more readily damaged by the contact devices used. 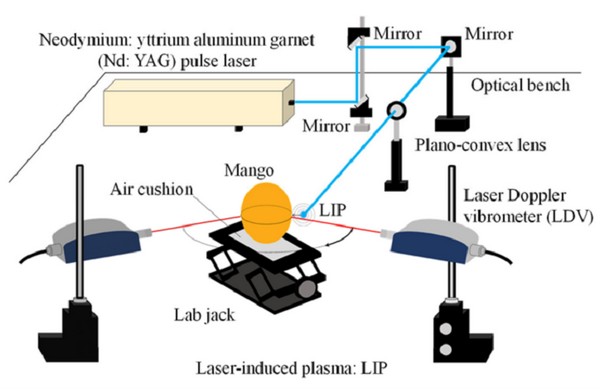 In a recent study published in Foods, a team of scientists from Shibaura Institute of Technology (SIT), Japan, addressed this issue through an innovative method for measuring the firmness of soft fruits using laser-induced plasma (LIP). This work is a sort of follow-up of a previous study in which LIP was used to quantify the firmness of harder fruits.

But what is LIP and how is it used? Plasma is a state of matter similar to the gaseous state but in which most particles have an electric charge. This energetic state can be produced in normal air by focusing a high-intensity laser beam onto a small volume. Because the generated plasma “bubble” is unstable, it immediately expands, sending out shockwaves at ultrasonic speeds. Professor Naoki Hosoya and colleagues at SIT had successfully used LIP shockwaves generated close to the surface of apples to excite a type of vibration called 0S2 mode, colloquially referred to as “football mode vibration” because of how the resulting deformation looks on spherical bodies. They then verified that the frequency of the 0S2 mode vibrations was correlated with the firmness of the fruit.