Italy and Poland holding the most apple stocks in Europe

WAPA has released an overview of the Northern Hemisphere apple and pear stocks, showing the stocks based on country and variety.

In Europe, Italy and Poland are holding the most apple stocks at the moment, according to the statistics released by WAPA regarding the apples and pears in the northern hemisphere. Poland now has about 50 per cent more apples than they did during this time last year. Overall though, both Italy and Poland have less in apples stock than they did in 2020.

The European countries and their apple stocks

In terms of varieties, Golden Delicious is most prominent in the stocks right now, but there are less of these in stock than there were a year ago. Gala is the runner-up variety, with less than half of the volumes of Golden Delicious.

In the US, the variety that is most in stock is Red Delicious, with Gala in second place followed by Fuji as the third most-stocked variety. Overall there are less apples stocked in the US than there were in 2020. 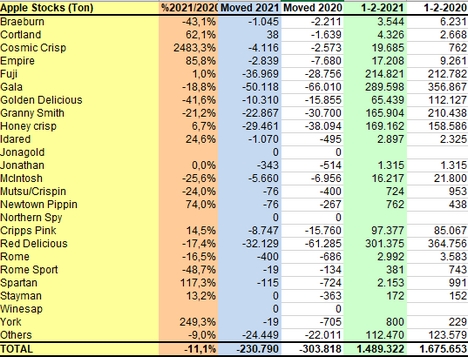 The stocked apple varieties in the United States

For the full overview of the Northern Hemisphere apple and pear stocks, please click here.