Onions and cabbage crops may recover from the Texas freeze

As assessments of Texas crops continue more than a week after the state was plunged into an unusual deep freeze causing significant state-wide damage, it’s becoming clear that some crops have fared better than others following the weather event.

“The only thing I know that survived was onions, cabbage and carrots,” says Michael Davis of Tex-Mex Sales LLC in Weslaco, TX who works largely in growing and shipping onions. He notes that the resiliency of onions showed given that early assessments saw that leaves on the onion plants were laid over and covered in ice. Once that melted off, the plants stood back up and while some tops of leaves that had seen ice were burnt, their undersides remained green and Davis says it looks like they will continue to grow. 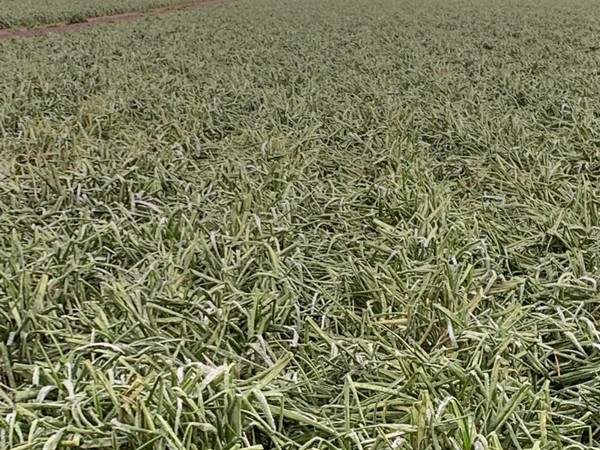 Growers (note: not Tex Mex's field) are waiting on onions to see how they made out after the storm.

“For onions, we’ll need a couple of weeks to see what will happen. Everyone says onions will come out of this dormancy period—they’ll take about a week to come out and start growing again,” says Davis. “But we need to be prepared that there also may be a percentage of the crop that doesn’t make it. It does look like we’re going to have a harvestable crop, but what percentage of the crop is damaged or lost is hard to tell right now.”

He adds that the onions were set to be harvested March 1st, though that’ll now be delayed by a week or more.

In McAllen, TX, Tony Martinez of Primo Trading Services LLC adds that when growers planted in the Rio Grande Valley growing region largely affected how well they’re coming out of the freeze. “People that planted early for onions aren’t sure what the effects are. But the earlier you planted, the more your loss will be,” he says, noting though this applies to overall crops, not just onions. He notes for his crops, onions and cabbage look spared and fortunately Primo Trading hadn’t transplanted its watermelon crop yet. Growers who had already planted watermelon and lost the crop could be scrambling now to replant, though it’s a race against time. “We’re entering March and a replant now pushes you back a number of weeks. The goal we all try and hit here is to come out at the end of April/beginning of May for the Memorial Day push.”

Citrus hit significantly
And then there’s citrus, which saw substantial losses. “Right now, on Texas Citrus, growers believe the crop that was remaining on the tree will be going to the juice plant,” says Martinez. How far growers were into their citrus crops also varied—while some smaller independent growers had been up to 80 percent harvested, others were not as far along in a season that typically wraps up in April-May.

On citrus, one of the longer-term effects could be the health of the citrus trees in the region. “The freeze knocked off the bloom which is going to produce fruit for the following season. Now growers are going to irrigate over the summer and assess trees and the tree has to nurse itself back to health. Trees that are three years or under may not survive this or could take a number of seasons to produce fruit as it should,” says Martinez. The next citrus season for the state is the fall—September for oranges and October for grapefruit--and those seasons could now be behind a number of months.

Martinez also adds that citrus trees in Northern Mexico south of the Texas border faced the same temperatures. “However, they received snow which protected the fruit and trees from the cold temperatures,” he says. “As of now groves appear to be intact and the season is continuing. However, the lemon trees did loose their bloom due to low temperatures which means there will be significant delays for harvest days.”

Out of the fields and groves, Martinez adds that the supply chain is very volatile in Texas currently. “There are supplies out there but Texas is not back to normal. It’s extremely extremely slow,” he says. While the assumption is that retailers would be in a hurry to restock produce items, some of them are not even thinking about produce right now and instead are contending with customers focused on fixing their infrastructure damage such as repairing drainpipes. “There’s a lot of this happening around the state. It’s definitely going to take some time,” he adds.