Michiel Minnaar: "Successful test with Otflow on mangos from Peru to Europe"

Last week, Otflow, in collaboration with a leading exotics exporter, conducted a test with Otflow, a special eleven-meter-long floor-cover made from recycled and water-resistant material. The floor-cover improves the air circulation in the container by creating an optimal air distribution that allows the temperature in the container to be kept at a constant level. This guarantees that less fruit is lost, which limits financial losses for both exporters and importers.

Test with mangos from Peru
Two test containers were used for the test - one with and one without Otflow, with mangos from Peru, destined for Rungis, which arrived in Rotterdam precisely during the winter period. "The set temperature for the container was 9 degrees, but since the outside temperature was below 0 degrees, the container had to start heating. Where the Otflow is normally used to properly distribute the cold air, warm air now had to be distributed", says Michiel Minnaar, Otflow sales manager.

"The image above clearly shows that the container without Otflow had a lot of trouble getting the warm air to the doors. Some pulp temperatures at doors on arrival even showed around 5 degrees, a temperature difference of almost 4 degrees from the front to the back of the container. The temperature recorders (image below) that were placed in the last pallet against the doors also showed a significant decrease when they ended up in the cold front of Europe in recent days." 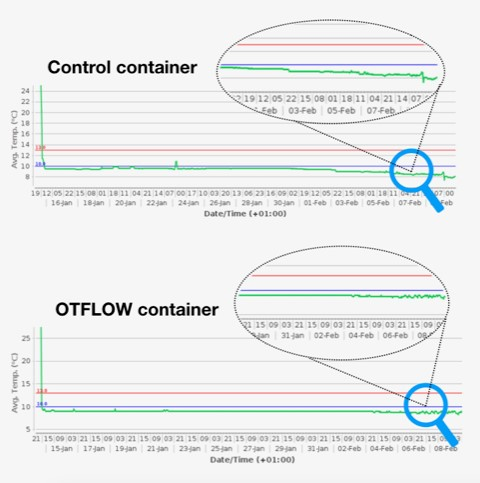 "Apart from the quality problems, for products such as mangos and avocados, this causes major problems at the ripening cells because of the incositent ripening stages due to the temperature differences in the container during transport. The container with Otflow, on the other hand, shows a much more homogeneous temperature from the front to the back of the container, with all the accompanying benefits," says Michiel.

"Of course, these kinds of cold conditions do not occur very often in the Netherlands, but many fruit and vegetable products are also shipped to parts of the world where this is causing problems such as Scandinavia, Russia, China and Canada. In any case we are very satisfied with the outcome of the test, which shows that - regardless of heat or cold - the Otflow ensures a better temperature distribution within the container."