Throughout the past few days, the cold weather hitting Texas has been unprecedented. The temperatures have been record-breaking along with hazardous amounts of ice and snow. Because this weather is so unusual for the state, there have been many challenges. Deborah Dijkhuizen of Delina Fresh, who have a warehouse in Texas, says: “Texas isn’t ready for these temperatures. There are power outages everywhere and pipes are bursting after being frozen.” For the produce industry specifically, the extent of the effects remains unclear but will likely be devastating. 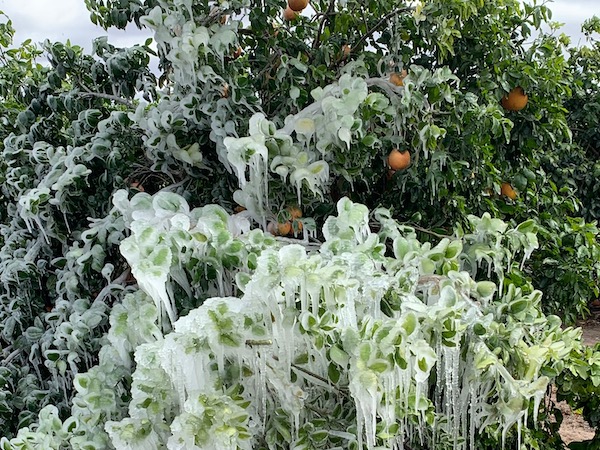 Protection of citrus groves impossible due to wind
Dale Murden of Texas Citrus Mutual shares: “We still had approximately 60% of our current grapefruit crop remaining on the trees and almost 100% of our Valencia orange crop. The mature fruit on trees can take temperatures down to 28 degrees Fahrenheit, but when you get 5+ hours into that, there will be ice on the trees and that could ruin the crop. Unfortunately, the temperatures we’ve been seeing so far have gotten much below that 28-degree mark – going down to 21 degrees for several hours at a time.”

While it is possible for growers to take measures to protect their trees, the effectiveness of steps taken depends on the type of freeze and wind speeds. “The wind has been blowing very hard, and this has made it almost impossible to take any protective actions,” Murden explains. “This weather could very well ruin this year’s crop – we might have to send it off to a juice plant rather than using it for the fresh industry,” he adds.

“St. Valentine’s Day Massacre for Texas Produce”
Dante Galeazzi of TIPA also explains that while the full extent of the damage won’t be clear for a few weeks, it will likely be devastating. “People are already saying this is the St. Valentine’s Day Massacre for Texas produce. While it will be a week or two before growers can better determine the extent of the damages, we know for sure that we’re dealing with long periods of time where temperatures have been below freezing and that Monday night will be colder than it was Sunday night. Monday morning, in McAllen we woke up to 22 degrees and Uvalde-area was sitting with several inches of snow. Some items should weather the colder temps, like the onions and cabbage, but things such as the tender leafy greens will be kept under a careful eye for the foreseeable future.”

Logistics disrupted
In addition to the damage done to the crops in the field, the harvested crops are seeing challenges too. Dijkhuizen shares: “Due to the blackouts, the warehouses have no electricity. Quite a few of our employees weren’t able to come to work because it was dangerous to be on the roads – and the people who did show up had to be sent home because we can’t work without power. Fortunately, the outages of the coolers haven’t been too much of an issue because of the cold outside.” 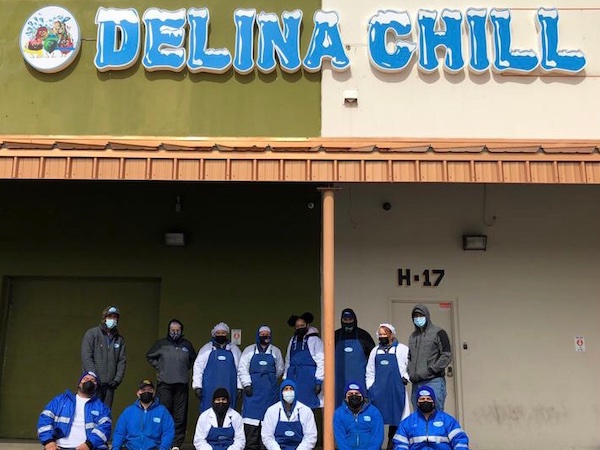 The Delina Fresh crew members who braved the icy roads to get to work.

The truck traffic on the roads has also come to a standstill. “Incoming and outgoing produce has been stopped. The highway patrol isn’t allowing trucks to continue going – so product in Texas can’t leave, and we can’t supply the state with new product either. The border with Mexico is open, but the crossings are limited because of the electricity outages. That’s the situation on Monday, so we’ll see how it develops. We have dragon fruit from Ecuador that had just been flown into Texas – after being delayed, because the air freight space was prioritizing flowers during Valentine’s day weekend – and now we can’t move the product. We have truckloads delivering product to Texas 2-3 times a week, but right now it’s just too dangerous to do so,” Dijkhuizen concludes.