US fresh fruit and vegetables imports continue to rise in 2020

Last year, the value of these imports was over $26 billion. The United States is, by far, the most important import global fresh fruit and vegetable market. Germany, the number two, imports around nine million tons annually. Russia is next with seven million tons, and China is number four with six million tonnes.

Mexico profits the most
Mexico, in particular, is profiting from the US's ever-increasing importing needs. This southern neighbor's share has now risen to just over half. Excluding bananas, that's even two-thirds. Of all the tomatoes the United States imports, no less than 90% come from Mexico. In the past year, that amounted to almost 1,7 million tons.

In 2020, Mexican bell pepper imports totaled million tons. Imports of Mexican avocados have increased rapidly. Last year that exceeded a million tons. Mexico's share of total US imports is well over half for many other products too. In fact, of all the strawberries imported into the United States in 2020, 99% came from Mexico. 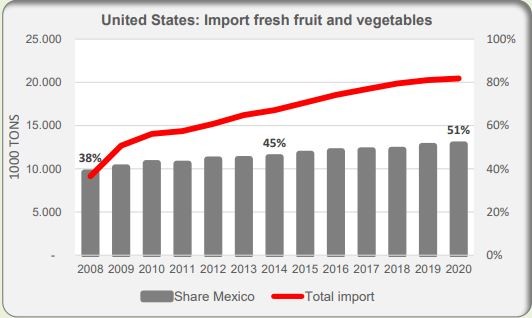 More imported across a broad (product) range
Last year, the USA imported record quantities of many products. Some products' imports grew by more than 30% between 2015 and 2020. These are avocados, lemons/limes, mangoes, courgettes, mandarins, asparagus, lettuce, blueberries, raspberries, blackberries, strawberries, and ginger.

Peru's doing better, too; has surpassed Chile
Besides Mexico, Peru has benefitted the most from the US's huge import demand. Peruvian grape imports were particularly voluminous in 2020. At 182,000 tons, a third more were imported than in 2019. More of these grapes were being brought into the country in the preceding years too.

More grapes were imported from Peru because of the sharp decline in grape imports from Chile. Chile still supplies the most grapes to the United States. But, in two years, those imports have fallen from 325,000 to 270,000 tons. Total US mandarin imports have increased sharply. That's happened in recent years and especially in the past year.

Both Peru and Chile benefited from the increased US demand. In 2020, Peru sent more of other products to the US too. These are asparagus, blueberries, mangos, and ginger. However, after rising steadily in previous years, Peruvian avocado imports came to a halt in 2020. The total fresh fruit and vegetable imports from Peru generally continued to grow in 2020. 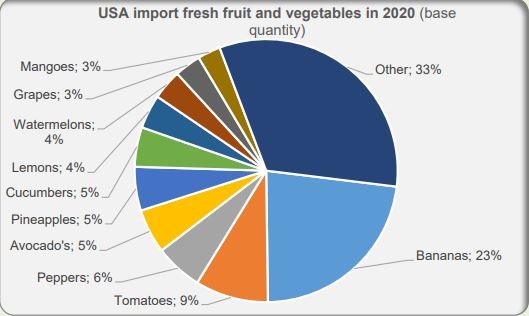 Chilean exports had a bad 2020
The same can't be said about the US's imports from Chile. Up to 2019, total imports from that country were always (much) larger than imports from Peru. In 2020, Peru overtook Chile. Except for mandarins, Chilean imports were (much) smaller in 2020 than before. That's for all other products. That doesn't only concern grapes. It's also mainly about oranges, lemons/limes, apples, blueberries, peaches/nectarines, plums, kiwi fruit, and pears.

The United States is Chile's main fruit and vegetable buyer. Total Chilean fruit and vegetable exports declined for the second consecutive year in 2020. It went from 3,17 million tons in 2018 to 3,04 million tons in 2019. Last year, it was 2,89 million tons. Exports from that country to the United States fell by six percent last year. Chile also exported four percent less to its second-largest buyer, China. And one percent less to the Netherlands, its third-largest client.

Lots of bananas from Guatemala
There are several countries from which the United States imported even more than Peru and Chile. Guatemala and Costa Rica are at the top of this list. The US got mainly bananas, and to a lesser extent melons, from Guatemala. Costa Rica exports mostly pineapples and bananas to the United States. The US imports bananas from Ecuador, Honduras, and Columbia too.

Canada supplies mainly 'greenhouse vegetables'
Canada is another of the USA's large fruit and vegetable suppliers. In the last three years, this has consistently amounted to about 975,000 tons. That's more than is imported from Peru and Chile. The US imports mainly cucumbers, tomatoes, and bell peppers from Canada. Imports from China have fallen a little in recent years. That's gone from 160,000 tons in 2018 to 140,000 tons last year. Ginger and garlic are the main Chinese products that head to the States. 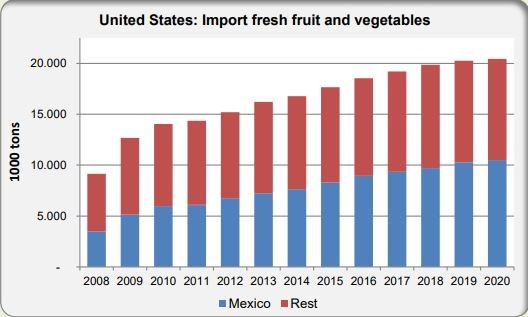