The Netherlands is increasingly developing as Europe's gateway for avocados grown elsewhere in the world. In 2020, the country imported 19% more of these than in 2019. The Netherlands is the second-largest global avocado importer. And it's the largest non-producing exporter of avocados. That's according to a Dutch Central Statistics Office (CBS) report. It's based on the latest figures.

Dutch non-European Union avocado imports have risen from 15 million kgs in 2000 to 373 million kgs last year. In 2019, that was still 313 million kilograms. The Netherlands has been importing more avocados from non-EU countries than all other EU countries combined since 2012. And the difference has only been increasing since then. The Netherlands now does 63% of all total European Union avocado imports from non-EU countries. In 2000, that was 15%.

Most of the avocados brought in by the Netherlands are destined for the European hinterland (re-export or quasi-transit). Very little of the imports, about nine percent, is sold on the Dutch market. The Dutch have become specialized in avocado import/export logistics. That's not only about transportation and distribution. It involves ripening, inspection, and possibly packaging too. Avocados arrive mainly at the port of Rotterdam. They usually leave the Netherlands by truck. 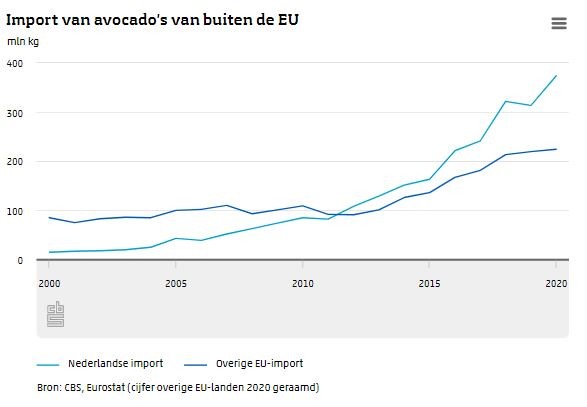 Dutch avocado imports reach more than €1 billion
In 2019, the Netherlands imported 349 million kgs of avocados. That includes avocados from EU countries. That makes the Netherlands the second-largest global avocado importer. It lags far behind the United States' 1,105 million kilograms. The US imports mainly from Mexico - the world's largest avocado-producing (and its neighboring) country.

Mexico is also the world's largest exporter. The Netherlands is a distant second. It's just ahead of Peru, where avocados are also grown. The Netherlands exports almost exclusively to European countries such as Germany (26%) and France (19%).

In 2020, the Dutch imported 415 million kgs of avocados. Again, including from European Union countries. That's 19% more than in 2019. That was the first time the country imported more than €1 billion's worth of avocados. That product's import value increased by 15%. It went from €920 million in 2019 to €1,06 billion in 2020. That's slightly more than bananas and grapes. That makes it the Netherlands' highest import value of all fruits. 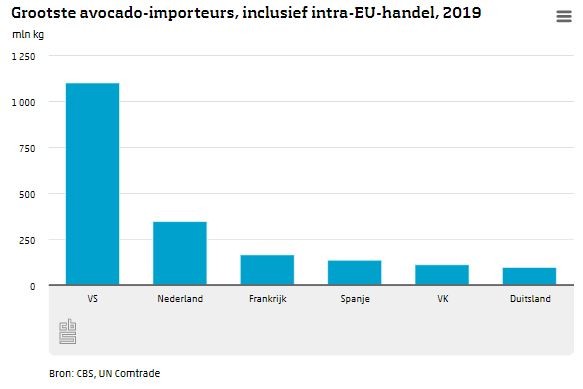 Peru supplies the most; Colombia and Kenya on the rise
In 2020, the Netherlands got most of its avocados from Peru. That came to 33% of the total imported volume. At 27%, that was also the case in 2019. In 2010, South Africa was still the Netherlands' leading avocado supplier, followed by Peru and Chile. The Netherlands got fewer avocados from Chile in 2020. But it remains the country's second most important supplier. Emerging avocado exporters to the Netherlands include Colombia and Kenya. Colombia's share has grown from zero percent in 2010 to 12% in 2020. Kenya's share increased from three to seven percent in that period.

Mexico sends most of its avocados to the USA. Over the past decade, exports to the Netherlands have, however, increased. The Mexican share of Dutch avocado imports rose from two percent in 2010 to nine percent in 2019. But, it fell to seven percent in 2020. 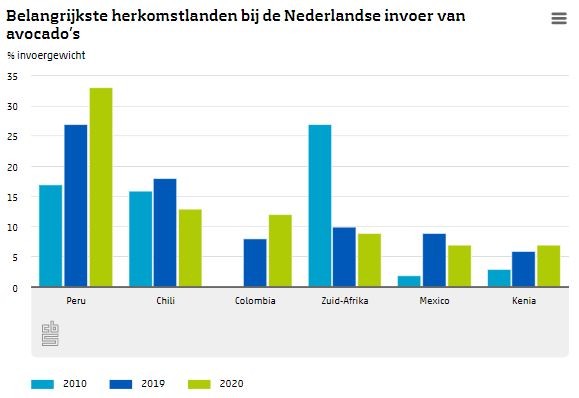 Mexicans eat a lot of avocados
According to external sources, Mexicans eat 6.5 to 7kgs of avocados per capita/year. This concerns consumption in the broad sense -  avocados available for the domestic market. That includes avocados eaten at restaurants, processed into other products, and wastage.  Quite a lot of Americans (3.5 kg) and Canadians (2.5 kg) eat avocados too.

At 1.2kg/capita, the EU is lagging considerably. The Netherlands is one of the EU countries where avocados are most popular. On the Dutch market, an estimated 2.2 kg of avocados were available per person in 2020. People in Japan (600g) and Russia (200g) eat far fewer avocados.

The Dutch company, Nature's Pride, started trading in avocados 15 years ago. It's been trying to get more people to eat them ever since. "We started introducing shoppers to avocados. We'd tell them how tasty they are and let them taste guacamole," Adriëlle Dankier, the company's commercial director, told the Dutch broadcaster, NOS. "We actually thought mangos would become better-known. But avocados' versatility has made the product very popular."