Connoisseurs aim to raise the game on cactus pears 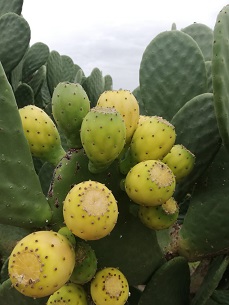 Six years ago Deon and Mandy Mills bought a farm in the Free State, close to Parys where he grew up and where he used to pick wild prickly pears.

The farm in Koppies already contained a cactus pear (or Indian fig) orchard of 4ha, established on a slight slope (which has been fortuitous this unusually rainy season), and they started applying their minds to the place their fruit and related products can take in the market.

Right: the Zastron variety is ripening to golden yellow fruit

“I’ve worked hard to get our cactus pears large and uniform,” Deon says, “aiming at ten to twelve fruit of uniform appearance in a carton.”

Last year was a poor cactus pear season, with drought and untimely rain reducing the summer crop, and then they lost their entire winter crop to extreme cold (-10.5°C) in July, but this year – the first year not receiving subpar rain since they moved here – the volumes and quality have supported their decision to start marketing their fruit under the Journey’s End name at municipal markets, from where it also makes its way to retailers like Food Lover's Market and some Spar stores.

Since spring, he's had an inkling that it would be a wet summer, Deon says. “Oldtime farmers around here will tell you: cactus pears let you know if the summer is going to be wet or dry. If there’s a good summer ahead, the plant makes a lot more leaves and carries a lot more fruit on each leaf. I have plants that have doubled in size since October.” 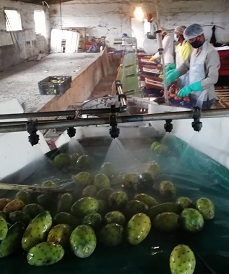 The profit margin on cactus pears is narrow because it is unusually labour-intensive (every single fruit is de-thorned separately).

Their Free State crop enters the market two or three weeks after the cactus pears from Brits, North West Province, and the average price is around R25 (1.12 euro) for a 2kg carton, but from the Free State they can supply until April.

A second crop growing through the winter and reaching market by early springtime can bring in up to R90 (5 euro) for a 2kg box, Deon says.

Rural love for the cactus pear
“If you come from the platteland [rural areas] you know a cactus pear,” Deon states, but that only holds true for the interior of the country he points out. They don’t bother sending fruit to Cape Town or Durban, where cactus pears are unknown. Most of their cactus pears go to the Johannesburg and Tshwane fresh produce markets. For the gold mining communities of the Free State where the fruit is sold loose at fruit stalls, they send supply to the Klerksdorp fresh produce market.

Those South Africans who know cactus pears traditionally also knew to shy away from red fruit; that was the tasteless fruit from a variety planted solely as cattle fodder, but this distrust of coloured prickly pears is a pity, Deon says, given the differences in taste between the commercial cultivars. Most of the country’s cactus pear production is therefore of light green Morado fruit.

“The Algerian has red fruit and it is commonly confused with the ‘beesturksvy’ but it has a superior taste to the Morado. I find that an Algerian cactus pear has a watermelon aftertaste while the orange Gymnocarpo has a hint of mango.”

He remarks that the sales of Algerian cactus pears have picked up over the past two years. 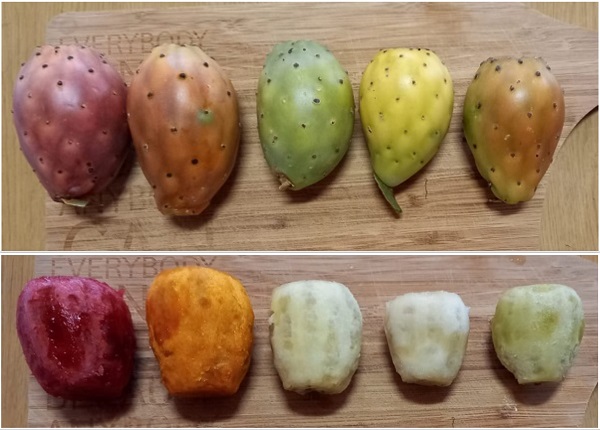 Fertilisation improves fruit size & shelf life
The Morado harvest is winding down, and Zastron and Skinner Court are next up, taking the cactus pear season into April.

He is puzzled, he says, by the very early stage of ripeness at which many cactus pears are picked. “We pick our fruit with a slight yellow tinge breaking through, for a sweeter fruit, but of course it reduces shelf life. I’ve noticed many buyers insist on very green cactus pears with shelf life in mind, but what they’re not realising is that cactus pears are not climacteric at all. Where you pick it, is where it stops. They consider it in the same light as, say, a banana.”

He proceeds to tell of the tests he has done on his fruit: six weeks in the fridge and the thick, protective skin starts wrinkling but the fruit remains fresh.

Moreover, they cut the fruit with a piece of cladode (leaf) attached to cover the bottom of the fruit and preserve moisture.

Every individual fruit separately de-thorned
The big obstacle that cactus pears, that used to be more forthrightly called prickly pears, has to overcome is the presence of the thorns (all of their varieties have spineless cladodes). 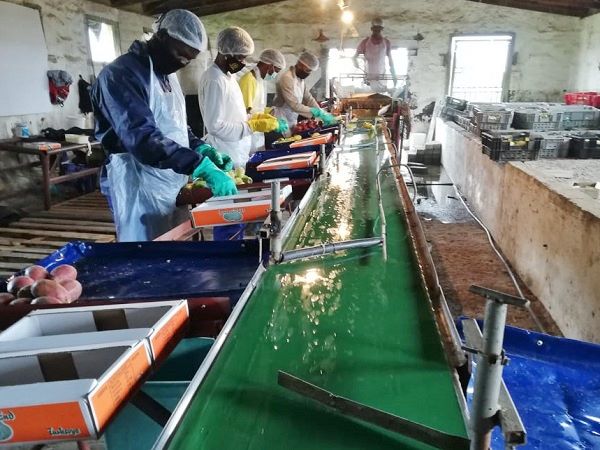 De-thorning cactus pears: gloves and aprons have to be replaced every few days. They built their own sorting table and de-thorning equipment

Their pickers’ gloves and aprons need to be replaced every second or third day during the harvest, Deon says, as it gets infested with thorns.
Imported de-thorning machines would be inordinately expensive, so Deon built his own de-thorner and sorting table. Small thorns are removed by water application at high pressure, then rolled through brushes to remove the larger thorns and finally polished by hand with a cloth for a final de-thorning. 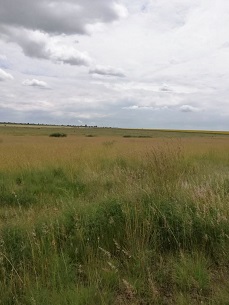 Cattle farmers rediscovered the value of cactus pears as fodder during the past five years of drought and the Mills’ neighbour carts away around 50 tonnes of the pruned cladodes for his Brahman herd.

Right: the plains of the Free State are flush after the recent rains

A Pretoria greengrocer told them of a regular client who’d buy boxes of cactus pears for her showjumping horses.

Cactus pear syrup & jam
From overripe fruit they make cactus pear jam and syrup which elicited a lot of attention when they tested it out at a flea market in East London recently.

"The cactus pear syrup was a hit, all sold out and the next day people were coming back for more. It's particularly good over ice cream," says Mandy.