In early October of 2020, US Trade Representative Robert Lighthizer requested that the International Trade Commission conduct a 201 global safeguard investigation to find if the increased imports of blueberries have caused injury to domestic growers. The decision will be made this Thursday, February 11th. Since the start of the investigation, domestic growers have come together in an American Blueberry Growers Alliance (ABGA) which works to represent the interests of US-based blueberry growers.

Jerome Crosby, Chairman of ABGA’s Executive Committee shares: “Before ABGA was established late last year, there was no organization to solely represent the interests of US-based blueberry growers. We are proud to fill this void and are beginning to expand our membership. We want to make sure that the US blueberry industry remains healthy and robust, so that American families can continue to choose American-grown blueberries. That is why we will continue to serve as a unified voice promoting American blueberry farmers, even after the ITC investigation concludes.”

Timing and pricing
The US harvest period for fresh blueberries can start as early as February in California and Florida, moving north and west and ending in October in Michigan, Oregon and Washington. “Imported blueberries used to stop entering the United States just as we began our harvesting season, but this is no longer the case,” Crosby shares. “Imports now enter our market throughout our harvesting periods, undercutting our price point. The current prices for blueberries are lower than they have been in years, which is attributed to the increase in imports,” he adds.

Because of the higher costs for labor and production in the US, American growers are unable to compete with the prices of the imported blueberries, Crosby explains. “This is an issue for all imports, both those from foreign companies and from US producers that produce outside of the US,” he says.

In addition to the price point, the timing of the imports also poses a challenge. “The imports during our shoulder season have a huge impact on overall seasonal profitability. Sales during these seasons can account for a significant share of revenues and virtually all of a farmer’s profits. The prices of the shoulder season establish the starting point of the seasonal price curve, so if the shoulder season prices are low – because of significant import supplies on the market – they will only get lower as the season progresses,” shares Crosby.

Increased import volumes
In addition to the pricing of the imported blueberries, Crosby comments that the volumes in which they are imported are also part of the challenge. He says: “The US imports of blueberries have surged enormously in recent years, rising nearly 62%. In 2015, 423 million pounds were imported which rose to 684 million pounds in 2019. Between 2015 and 2019, blueberry imports from Peru rose by 816% and those from Mexico by 116%.” While collecting evidence for the investigation, the National Farmers Union noted in a letter that growers’ operating returns fell 32.4% during this time frame. 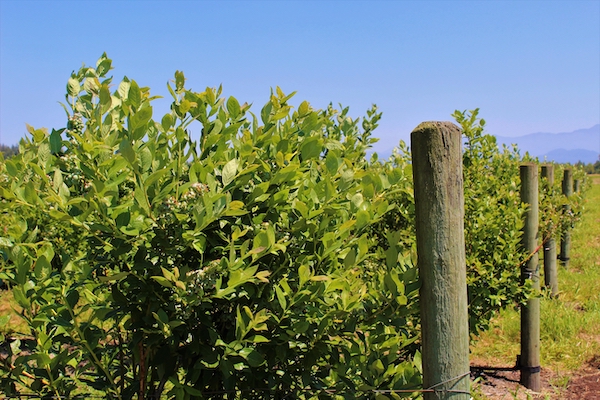 Desired action: temporary relief for domestic growers
If an affirmative injury determination is made on February 11th, the President of the United States will determine what remedies will be put in place. “We are not asking for a ban on blueberry imports,” says Crosby. “We need temporary relief during our critical harvest season and protection during our production periods. This will give American blueberry growers the time to invest in new varieties that are better suited to mechanized harvests, the harvesters themselves and field protection. It will also give us time to develop alternatives to the industry structure and other initiatives to make the domestic industry more competitive,” he explains.

While the President decides what remedies to implement, Crosby believes that this is a bipartisan issue. “President Biden often talks about the importance of securing domestic supply chains and Buy America, including his recent signing of an executive order directing the federal government to buy from American producers. We look forward to working with the Biden administration in hopes of extending this idea to the broader economy,” says Crosby.

The blueberry industry is important for the livelihoods of many Americans, says Crosby. “Blueberries provide millions of dollars of economic benefits to rural communities, from direct full-time and seasonal jobs, to indirect benefits such as the purchasing of farm inputs, packaging, processing and distribution services. If American blueberry growers are forced out of business, entire communities will suffer. Remedy measures such as limits on imported volumes, tariffs or minimum prices will provide us with the means to compete fairly once protections are lifted and are critical to the long-term viability of our industry,” he concludes.

In tomorrow’s publication, FreshPlaza will share the importer and foreign producer/exporter point of view on the ITC investigation and the blueberry industry.