How did Dutch bell peppers fare in 2020? Overseas sales rose by five percent compared to 2019. The neighboring countries of Germany (+12%) and the United Kingdom (+10%), in particular, bought more Dutch bell peppers. But sales to countries like Poland and Ireland also did well. That's according to Wilco van den Berg of GroentenFruit Huis on LinkedIn.

Domestic bell pepper sales also rose last year. Supermarkets in the Netherlands sold 18% more of these than the previous year. However, due to the lockdown, fewer were processed by restaurants and caterers.

But transport prices were high, and there were fewer flights. Exports to distant destinations, therefore, declined sharply. For example, there were 50% fewer bell peppers exported to the US in 2020. As a result, that country fell from fourth place in 2019 to ninth last year. Dutch bell pepper sales to Japan decreased by a third. 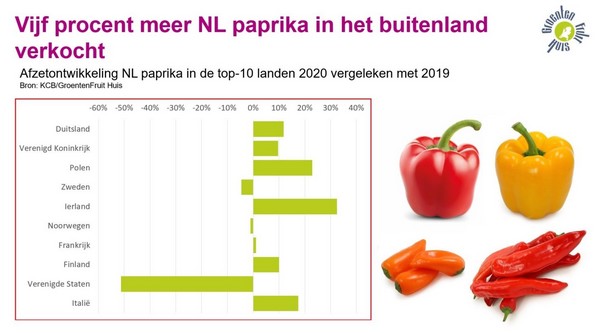