Anecoop presents this exotic novelty, which has high nutritional power and is a source of vitamin C

Green papaya from Spain, a variety that is consumed as a vegetable

Anecoop, a leading Spanish cooperative in the marketing of fruits and vegetables, presents a new product on the market, the green papaya.

This product, which is mainly grown in areas with a subtropical Mediterranean climate such as Almeria and Murcia, is consumed like a vegetable. Its cultivation in Spain extends throughout the year, although its production peaks between January and February. Its exterior and interior colors are different than those of ripe papaya. Its exterior color is totally green and doesn't have any yellow hue, while its interior pulp is white instead of orange.

In Europe, it's still a novelty. In Asia, South and Central America, its consumption is more widespread. Anecoop is one of the first companies to cultivate this product in Spain to market in the European continent, and it's the company with the biggest volume, as the company's harvest forecasts for this campaign stand at 500 tons and it's still growing.

One of the competitive advantages of the Spanish papaya is its proximity to European markets, which reduces transport times and minimizes its carbon footprint.

Nutritional properties and consumption suggestions
According to the nutritional evaluation carried out by the Complutense University of Madrid, green papaya has a low energy value and constitutes an important source of fiber and vitamin C, as the consumption of 100 g of this fruit supplies more than 45% of the Recommended Daily Intake of this vitamin.

A peculiarity of this fruit is that it contains papain, an enzyme that facilitates the digestion of proteins. In short, it is a product with high nutritional power that can be eaten cooked, fried, or used as an ingredient in fresh smoothies. It can also be an interesting and attractive ingredient for salads, pasta, rice, and desserts. 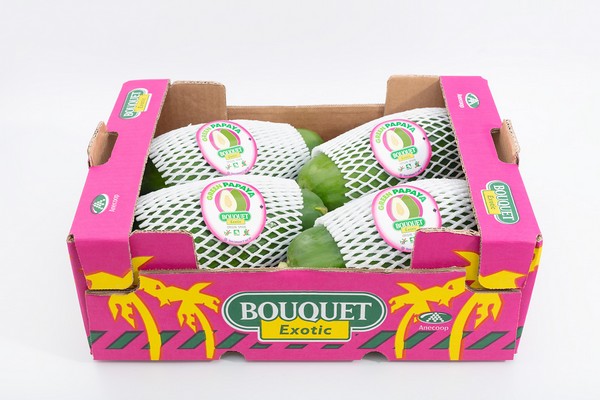 Exóticos del Sur
In 2017, Anecoop created the AIE Exoticos del Sur with the aim of ordering, promoting, and consolidating the commercialization of local papaya in Europe. To date, the group is made up of nearly twenty producers from Almeria. Anecoop complements its offer through its alliances with producers from Murcia and the Canary Islands. Anecoop is currently the main papaya operator nationwide with 30 hectares of cultivation. It has specific papaya handling centers in the different production areas, as well as exclusive lines for the hospitality industry.