NL: Gerard van den Bos and Aris van Daalen about the merger of their companies

“BosDaalen will retain a family character”

Two companies have been part of the Westland landscape in the Netherlands for many years. CARGOBOSS since 1902 and Van Daalen Transport since 1920. These family businesses found each other in the 1970s. In 1998, these ties became even closer. Then both families bought back their businesses from TDG. On 1 January 2021, the companies took the next step - they merged to form BosDaalen. 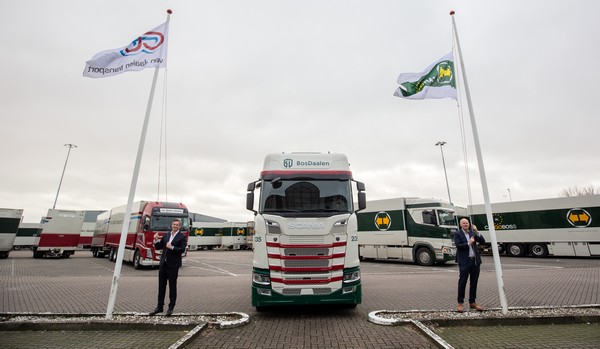 The old flags are lowered...

At BosDaalen, they like speaking about family. "The family business isn't only in our genes, we project it to our employees too," says Gerard van den Bos and Aris van Daalen. They're BosDaalen's Managing Directors. "The two families are now one. By choosing the name BosDaalen, we're also expressing this."

They chose this name because "BD Logistics doesn't sound very friendly, does it?" The new BosDaalen flags are already flying at the company's premises in Maasdijk. And their trucks are being delivered in the new colors. "But you'll still see our trucks in the old colors for a while. Repainting 120 trucks all at once is rather costly." 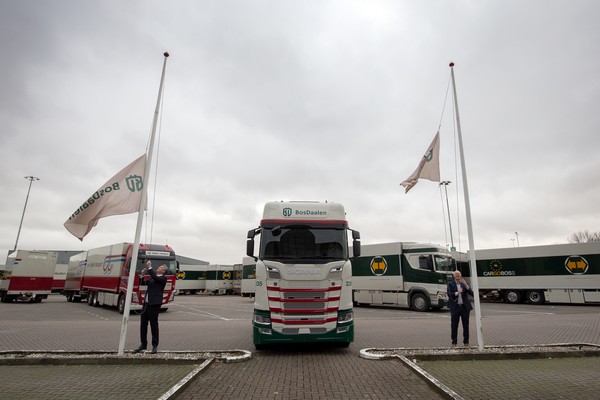 ...and the new one hoisted.

The merger, however, involves more than just a new name. "By bringing both fleets together, we've become much larger. We've taken a considerable professional step too. Combine that with our company's approachability, and these are things that ultimately benefit the client. After all, they no longer have to choose between the two companies," say the two men.

"Internally, it's also much more efficient. Although we used to work closely together, there were sometimes still problems. We were still separate companies. That's no longer the case. And we've combined our staff's brainpower to a much greater extent. Now we can reap those benefits. We can work towards the top transporter position. That's of vegetable, fruit, flowers, and plants to Germany, Switzerland, and northern France." 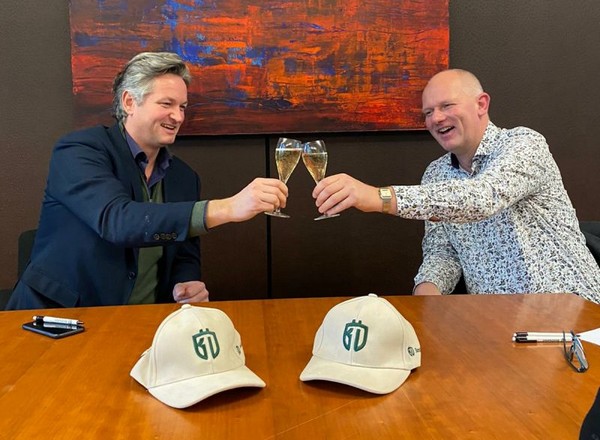 BosDaalen is a temperature-controlled goods transportation business. They're strongly focused on transport to Germany, Switzerland, and northern France. To deliver cargo quickly to its destination, the company has several depots. It also has a storage and transshipment location in Eschbach in Germany. That's 30 kilometers from the Swiss border and a stone's throw from France. "Drivers can switch at these locations too. So, the load can go straight through," says Aris.

"We have sleeping accommodation for our drivers there too, just like in Maasdijk. In that respect, we're unique in the sector. In addition to transporters, we're also a kind of hotelier. But we don't serve dinner. So, according to the coronavirus rules, we're allowed to stay open for our drivers. We've had little trouble with that. Plant exports to Switzerland did drop somewhat in March 2020. But, fruit and vegetable transportation to Germany rose. However, we're cautious when it comes to our drivers and staff's health. Despite the measures we've taken, that worries me most."

BosDaalen is bursting with new ideas for this year. "We'll continue working with our present and new clients. However, we especially want to take further steps in digitalization," Gerard explains. "We want to share more data. And so give clients a more transparent picture of their cargo' status. We want to map out and monitor many things."

"Not only temperatures but also loading, unloading, and transport en route. Then you always know what's going on. We're going to do more work on our web portal too. And how we can link to our clients' systems. That's in line with the other developments. This will enable us to offer even more efficient transportation in the future."

Does BosDaalen have room for other transportation businesses? "It's not a goal in itself. But I'm not ruling it out either. After all, our scale's increased. So, our management team's functions can grow. It can professionalize certain points in the sector. There are additional regulations and greater challenges in the future. So I can imagine not every transporter can afford that. I should add, however, that scaling up was certainly not the intention when we got this merger idea a year ago," concludes Aris.