Dveloped by Neiker - Basque Institute for Agricultural Research and Development

Late last year, the Udapa cooperative from Spain’s Alava province has launched the Beltza potato, a new variety created and registered by Neiker, which stands out for its intense purple color and its high antioxidant compounds. Last spring, Udapa received 600 kilograms of Beltza potato seed from Neiker. Now, nearly 7 tons obtained from that first production campaign will be used to carry out a market acceptance study.

For the moment, consumers will be able to purchase this new reference in 1 kilogram formats, in cardboard trays and wrapped in compostable film, in EROSKI and El Corte Inglés supermarkets, as well as in traditional greengrocers supplied by the wholesaler Iru fruits. 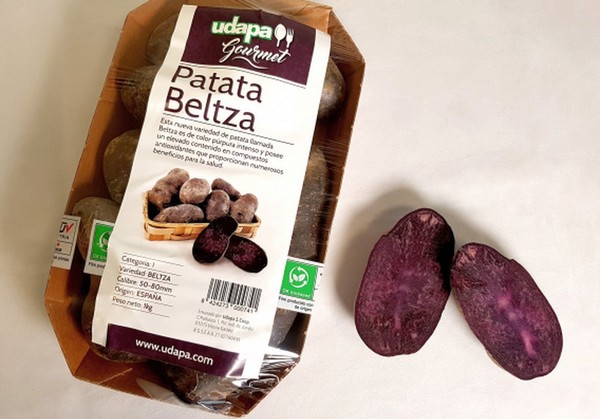 Alfonso Sáenz de Cámara, manager of Udapa S.Coop, told potatopro.com: “Despite the fact that Beltza has a dark color that most of us are not used to associate with potatoes, we hope that consumers will accept the product well and enjoy its flavor and all its qualities. At the moment, this reference is generating a lot of interest among people who have not tried purple potato and, little by little, they are being encouraged to buy it.”

In 2019,  Neiker registered the new purple variety called 'Beltza' in the European Registry of Protected Varieties, continuing with its mission of helping the agricultural sector with innovative products with which to diversify and adapt to consumer demands.

In recent years, Neiker has started a selection program with the aim of obtaining varieties adapted to our growing conditions and with high levels of bioactive compounds and antioxidant capacity, related to the delay of cellular aging and prevention of cardiovascular diseases.