It's Tarocco time now. These beautifully colored semi-blood oranges never go completely red like other blood oranges. They remain red/orange. How red they go depends on how cold the nights get. All blood oranges need frosty nights to develop their lovely dark red color.

In Sicily, the Salamita cooperative harvests different oranges throughout the year. The standard Navel variety's season begins in November. The Tarocco is harvested in January. The Moro and Ovale between March and April. And Valencias from the end of April until June. 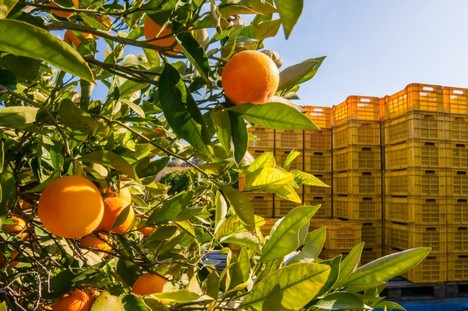 Four Sicilian brothers founded a small farmers' cooperative in 1972. They named it Salamita, their family name. Since then, more than 110 farmers have joined.

Biodynamic cultivation
Most Salamati members farm biodynamically and partly organically. This is bearing fruit. These farmers know how to get the best out of the fertile, mineral-rich volcanic soil surrounding Mount Etna. This increases their products' quality. This cooperative also continually helps many other Sicilian farmers all over the island to switch to biodynamic cultivation. This method uses no artificial fertilizers and pesticides, or synthetic chemicals.

Sicilian gold
However, Sicilian orchards produce far more than just Tarocco blood oranges. Think of grapes, mandarins, and lemons, but also nuts, figs, and kumquats. The Dutch cooperative, Odin, stocks these and other products. "You can find other Salamita products in our stores. These include wines, olive oil, pasta, and their delicious almond pastries. We often call it Sicilian gold," says an Odin representative.

First supplier
"Salamita is very special to us. We've worked with them from the very start. After a trip to Sicily in 1984, we started selling biodynamic oranges we'd bought from them. Thus, they became our first supplier from southern Europe. Odin was the first company in the Netherlands to import organic products from Mediterranean countries. To this day, we still proudly sell Salamita's lovely Italian products," the spokesperson concludes.