The Costa Tropical of Granada and part of the Axarquía of Malaga concentrate most of the area destined for the cultivation of cherimoyas in Spain, which has now established itself as the world leader in the production of this fruit native to South America.

"The cherimoya campaign runs from September to May," stated Alberto Casanova, head of the Import-Export Department of Frutas Manzano, a Granada-based company that specializes in subtropical fruits and a national benchmark in the marketing of cherimoyas and avocados. “Volumes tend to be strongest between mid-September and mid-November when the production peaks. After that, they decrease and rise again in mid-March. Currently, there are lower volumes of fruit, but they allow us to have a continuous production for 8 to 9 months a year,” he said. 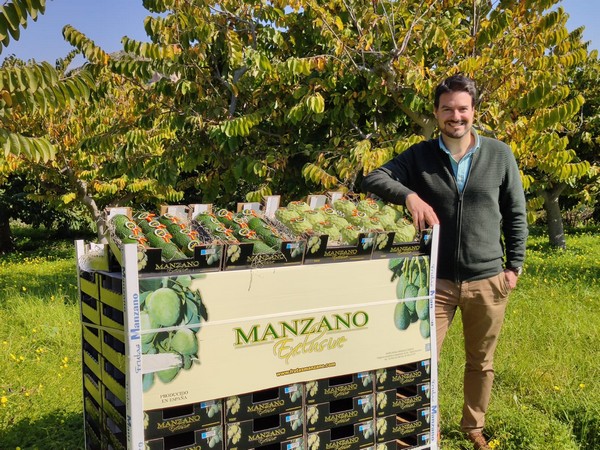 Demand has been good throughout the marketing season, Alberto highlighted. “We are lucky to have a niche product that not many producers grow, as it's always in good demand. Furthermore, the offer is very concentrated, which helps us to be like a small cluster,” he stated.

He also said that prices had not been significantly affected by the complex context unleashed by the second wave of the coronavirus and the adoption of new restrictions throughout Europe, which developed in parallel with the national cherimoya campaign. "In general terms, the agri-food sector and the products we work with haven't been terribly affected by the pandemic," Alberto said.

"In fact, at the beginning of the health crisis, the prices of different products, such as avocado, increased because there were delays in shipments from South America due to confinements and they have followed that trend. In addition, there's not much production of any of these products. There are parts of the sector that have been affected, such as the Horeca channel. Many of our clients that made daily or weekly orders are no longer ordering. However, the demand has been offset by other channels and, in the end, the total consumption hasn't changed much.”

Demand for cherimoya increases in Christmas, just when the production of this fruit, which is sensitive to cold, is at a low point. "That's a problem we have. Customers demand a lot of fruit at that time when there really is less fruit. Unfortunately, cherimoya isn't like the avocado, which you can keep on the tree for months. You have to pick it at the right time.”

Spain's Hass avocado campaign begins
The Spanish subtropical campaign is complemented at this time with the incorporation of Hass avocado, another important product for Frutas Manzano. “The national avocado harvest is starting right now. We collected something last month, but it's now, at the beginning of the year when the avocado is at its best and reaches a very good point of maturity," Alberto said. "It's also when the markets start to demand it more."

In fact, import volumes from Colombia, Mexico, and Chile are falling considerably, which is favoring a greater demand for Spanish avocado, he added. “Besides, this week's rains are causing the market to change rapidly. Prices are rising a lot and we expect they will be high for several weeks/months as each of these origins gradually disappears from the market. Up until Peru enters the market,” he said. The arrival of avocados from Peru usually represents a turning point and the beginning of the summer production.

“Peru enters the market at the end of March with low volumes, but there is a flood of Peruvian avocados from mid-May to mid-July. The important thing is that shipments are made in an orderly manner. The massive arrival of avocados would be counterproductive for us and them because it would hinder the market and strongly decrease prices.”

"It seems that Peru is focusing on new markets, such as China, where its consumption growing a lot. That benefits us and is very interesting for Europe," Alberto stated. “If shipments are divided between Europe, the US, and China and the shipments to Europe are made in an orderly manner, we could have more constant and reasonable prices,” he said.

Spanish mango requires more promotion
The Spanish mango season, which began in September, came to an end at the end of November. Thus, the company based in the municipality of Salobreña is currently working with imported mangoes. "Practically all of our supply comes from Brazil, although we are starting to receive the Kent variety from Peru," Alberto stated. “It seems that there is less production this year, which would be positive for prices because they tend to fall every year around this time. Last year they fell to 2 or 3 euro per box. Now they stand at 4 to 5 euro per box, which is a low average price, but is still reasonable.”

In recent years the national mango has also achieved relatively low prices. However, its quality is spectacular compared to the imported mango.

According to Alberto Casanova, that's why the Spanish sector has to make an additional effort to give it the added value that the mango grown on the peninsula, which stands out in Europe for its quality and point of maturity, has.

“Supermarkets in Europe want the mango at a certain price and they make all kinds of efforts to keep it that way. There's always production, and when the Spanish harvest comes they try not to pay much more for it. There is an increasing percentage of customers who prefer the national mango for its quality, and who do not mind paying 2 or 3 euro more per box.

Important promotional efforts are being made, but so far they are not enough, Alberto said. "It will be very difficult to differentiate mango prices based on their origin until European consumers demand the supermarket chains have Spanish mangoes," he said. "It's a complicated issue, but the perception there is of Spanish mango is starting to change after years of promotion and consolidating its quality."