Heavy rainfall in the Northern Cape – over 100mm over the past two days in some places – has gladdened the hearts of most in this arid area, but for the table grape producers in the Orange River Region yesterday’s rain has come at an inopportune time, with a third of the table grape crop still to be harvested. 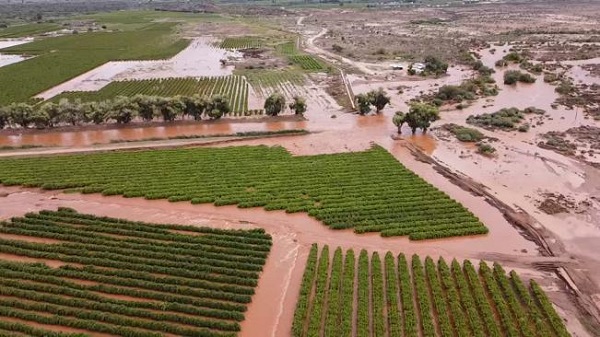 The brown colour shows the flood water collected across land, not from the Orange River

In Kakamas it rained between 75mm and 100mm yesterday. Non-perennial streams feeding into the Orange River have come to life with the rain but the Orange River itself is not in flood. The rain is of extreme importance to the drought-stricken Kalahari and its livestock farmers, but it's awkward timing for grape growers.

“It’s bad news for us because up until now the Orange River has packed only about 65% of the crop. Later areas like Augrabies, Kanoneiland, Upington and Kakamas usually pack into the first week of February,” says Alwyn Dippenaar, chair of the Orange River Producers Association. 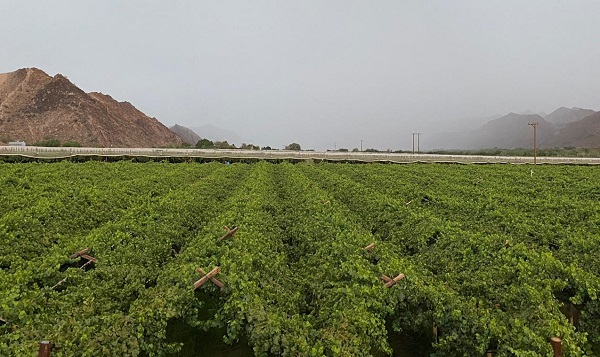 “There’s definitely a lot of damage but it’s still much too wet to see exactly. Only when it’s drier we’ll be able to move around in the vineyards and assess the extent of it. No cultivar can escape damage with such an amount of rain.”

Possible escape for latest cultivars
He points out that it is possible that damage on the cultivars which haven’t yet coloured and only start ripening from mid-January, could be minimal, but only after 48 hours of sunshine they’ll be able to form an accurate evaluation of the impact of the rain. The impact will be adverse on the raisin industry too. 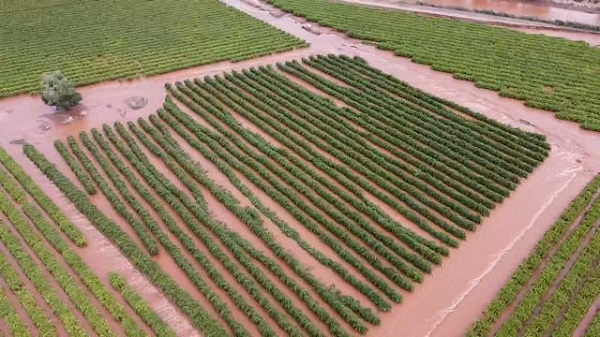 However, he adds, buyers should be careful not to conflate the rain in the Orange River region with the grape harvest just kicking off in South Africa’s Western Cape regions like Piketberg and Paarl, at least 600km away to the south.

“There are high volumes of grapes coming out of the Western Cape that have not been affected.” 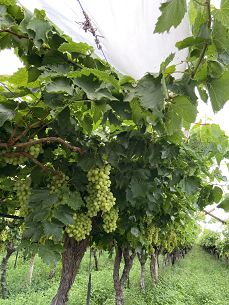 Alwyn notes that there will be no picking or packing for at least the next two days, which means a loss of 60% of the week’s capacity this week.

Humidity in vineyards under plastic could be a problem
Magdalena du Plessis of organic grape producer Carpe Diem in Upington says it hasn’t rained like this in many years.

“Weeks 1,2 and 3 are still big packing weeks for us, it’s a really sad situation. We have been fortunate with minimal rain in the early season up until now. A rainy season was predicted but we didn’t expect this! We do need the rain. We’ve had a drought for many, many years.”

At the moment Thompsons, Timco, Sweet Celebration™, Sweet Globe™, Allison and Scarlotta Seedless are due to be harvested in the Orange River area.