Dutch onions seem to be heading toward new export volumes again this season. That's according to the Holland Onions newsletter. Volumes are well above 30.000 tons for the 11th week in a row. Exports are, therefore, already 11% higher than the previous peak season. At the beginning of October, the magic ceiling of 40.000 tons was broken.

That was the first time that's ever happened. But, in the first week of November, the new record was immediately smashed. There were dizzying weekend exports of more than 46.000 tons. Every avenue in the chain is currently being used to meet the enormous demand.

Ten years of growth
Since 2010, there's been a reliable, consistent increase in export figures of just under four percent per annum. In some years, growth was only interrupted by the miscalculated harvests. Like in 2018, when Holland Onions stock was sold out prematurely. 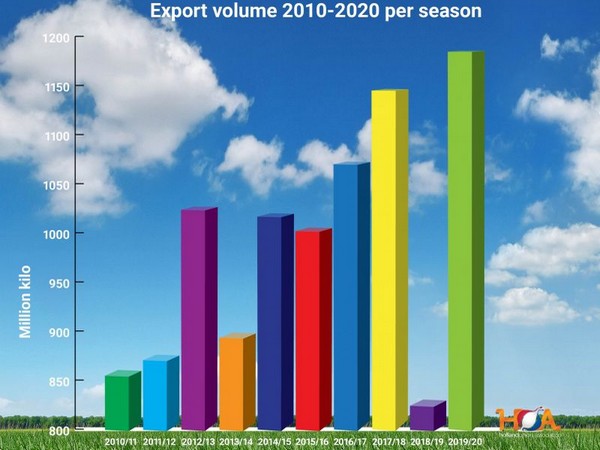 Corona-proof
In this Corona year, abrupt changes occurred in global food demands. This caused many ripple effects for the Dutch onion chain. Restaurants and the hospitality industry have closed down. That's led to people buying more goods in supermarkets.

Consumer demand has shifted to basic necessities. These products, such as Dutch onions, have a good flavor, long shelf life, and high nutritional value. Many people have rediscovered home cooking, thanks to COVID-19. This pandemic has made home cooking extremely popular.

And these home chefs like to use fresh, tasty ingredients. There's a great interest in healthy food sources too. Within the Dutch borders, the demand for onions increased by 21% over the first six months of 2020. That was through daily shopping alone. You can see a similar pattern all over the world.

Bangladesh in top 10
Some countries, like India, have even switched to price-freezes or export bans on onions. That's to ensure an adequate domestic onion supply. These measures are necessary because onions are a primary necessity in those countries. Also, onion shortages lead directly to political unrest and instability.

At first, it seemed exports to India and its neighboring countries were a one-off opportunity. India usually serves those countries around it. But, this season, once again, due to local shortages, Dutch onions were being sent to that region. Bangladesh came out of nowhere and imported over 17 million kgs in just eight weeks.

Sri Lanka is well on its way to doubling its imports this season. The Philippines has already almost quadrupled the imported quantity of Dutch Onions. It's, therefore, in a provisional sixth position. Hong Kong is also on the board. China, too, could potentially become a major Dutch onion buyer. They just need to open their border.

Favorite hero
The Netherlands has, fortunately, been able to jump in and provide people elsewhere in the world with sufficient, healthy food. No less than 92% of the global onion production is grown and consumed for local markets (local-for-local, so to speak). However, the remaining eight percent is traded. This trade is proving increasingly necessary to fill local shortages.

The Netherlands has a 20% share of that market. So, it's played a prominent pioneering role in this respect for decades. This role's importance has become clear. In recent years, other countries have had poor harvests with basic products like onions. They then quickly turn to and appreciate the good value-for-money Dutch onions.

Broad spread
This season, there has, in fact, been a sustainable, roughly six percent growth. That's in all countries. This translates to great, steadily increasing exports that offer opportunities. Dutch Onions are also becoming more popular in the Caribbean. Almost all the islands in that region have become regular buyers.

Jamaica, Haiti, and the Dominican Republic are appreciating this product more and more. They've gained permanent spots in the top 30 Dutch onion-buying countries. Saint Martin is the French part of Saint Martin. It made its debut in the export ranks this season.

Countries like Nicaragua and Honduras represent Central America particularly well. However, political unrest has brought exports to Panama to a complete halt. As in the neighboring Costa Rica, where Dutch onions no longer have a foothold. 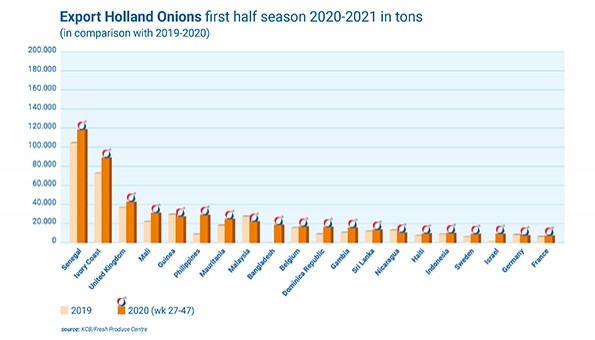 Notable newcomers
Japan and Azerbaijan are entirely new markets. They have cautiously taken their first few 100kgs. And for the first time ever, Dutch onions are also being sent to Canada. It's the third year that the United Arab Emirates is taking 1 million kgs, leaving Brazil behind this year.

Along with the East Coast of Africa, these parts of the world form a huge market. Demand is expected to increase rapidly in the years to come. There are two main requirements for onion exports - a stable political situation, and supply and transit logistical opportunities.

These requirements apply in a broad sense. They go hand in hand with those countries' prosperity and economic development. That's also why it makes sense to continue working on introducing Dutch onions to these areas.