The Mexican Ministry of Agricultural and Rural Development releases an annual Atlas of Panorama Agroalimentaria. This report contains all the country's agricultural and food sector production and export figures for the previous year. The 2019 edition of this voluminous, colorful book shows a further increase in Mexican agricultural and food production and exports. Fruit and vegetables make up most of the lists. The coronavirus pandemic's impact is, of course, not yet evident.

Fruit and vegetables are especially important in the Mexican agricultural sector. Mexico is the world's largest avocado and blackberry producer. It's the second-largest producer of green bell peppers, raspberries, and limes. And the third-largest of asparagus, strawberries, and papaya.

Mexico - export country
Mexico isn't only a food production country. As the Panorama shows, it's above all an important export country. It ranks eighth in the world for this (The EU is considered a single exporter). At $8.8 billion in 2019, it had its highest food trade surplus in the last 25 years. The main Mexican food export is beer (totaling $4.8 billion in 2019). Following that is avocado ($3.1 billion) and soft fruit ($2.6 billion). And then tomatoes ($2 billion) and bell peppers ($1.4 billion).

Avocados are green gold
Avocados, also known as 'green gold,' continue to lead the rankings. In 10 years, avocado production has more than doubled, from 1.1 million tons to 2.3 million tons. This product's export value has increased fivefold over this period. It's gone from $666 million to $3.2 billion (see graph 1). 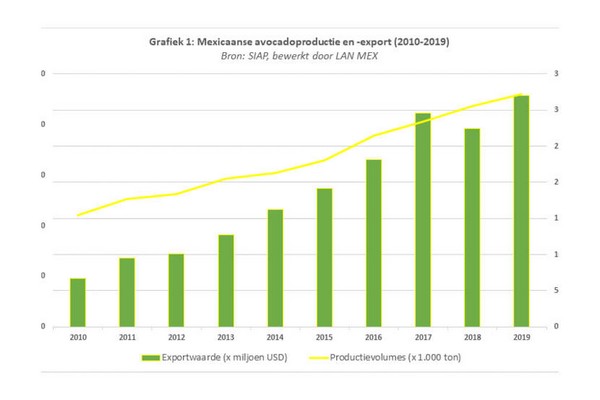 Export value
Many other crops have been on the rise too. Notably, the export values of many of these increase must faster than their production volumes. Graph 2 shows several crops' export values trend. The increase in several products' export values is particularly noteworthy. These are soft fruits (raspberries and strawberries), green pepper, and pecans. 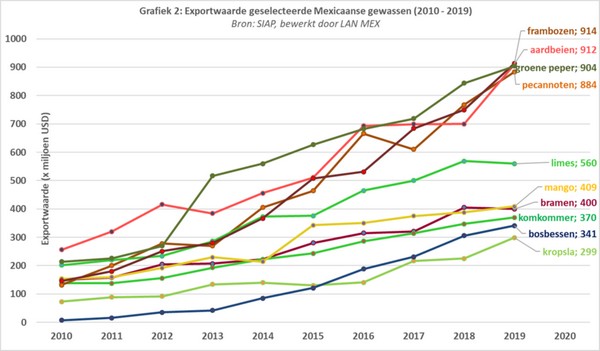