A North Queensland exotic fruit grower says it was a proud moment when his produce was compared favourably to what was grown in South East Asia, by a top Australian television chef.

Fruit Forest Farm was the national winner of the 2020 Harvey Norman Delicious Produce Awards, after initially being nominated by Sunshine Coast chef Jake Nicolson in the state competition because he thought the quality of the fruit was so high. It turned out to be a fruitful decision to enter both awards, as the national competition judge Neil Perry could not speak highly enough of the tropical produce.

"We were picking abius at the time, so we just sent that in as a single fruit for the state competition," Co-owner Peter Salleras said. "We were then notified that we won the state award in the 'From the Earth' category, and we were given the chance to progress to the national award. We didn't have any abius left as the season had finished so we packed a box of fruit - and we had a spectacular box of fruit, I must say. There was red and gold rambutans, mangosteens, rollinia, soursop and longkongs - pretty prime stuff. Neil Perry's comment that it tastes as good or better than what he tasted in Thailand was what we wanted to hear. We were first notified that we were a gold medallist, but then the really big deal of the awards process is getting the top gong with the trophy for the best of the gold medal winners. We thought it may have been beyond us because we just do our own thing up here, but even at that stage we didn't really know how big a deal it was." 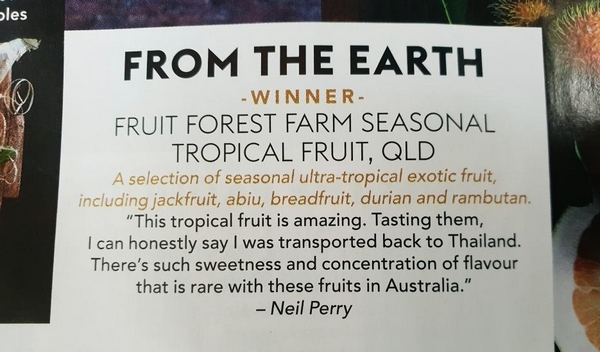 Fruit Forest Farm was established 37 years ago by Mr Salleras and his wife Alison at Mission Beach, which is midway between Townsville and Cairns. It is mostly rainforest blocks that makeup 160 of the 220 acres altogether. The family produce a wide range of exotic tropical tree fruits including green jackfruit, soursop, plantains, star apples, wax jambu, rambutans, mangosteens, durian, breadfruit, pomelos, abiu and rollinia deliciosa (Amazon custard apple) - most of which sells out before it is even picked.

"We can't grow enough of most things that we supply to the markets," he said. "Generally, we work on growing a big range of stuff, and there's always people who say we can get you amazing money for that, so we have to look at the logistics of whether it can travel and whether it will work commercially, or find a niche market for it. A lot of our stuff doesn't go to the big chains because we simply don't have enough volume to even think about it. The agents are always after it, as they want to extend their range. Demand is very strong; we sell most of it before it even flowers. The only problem agents say about our stuff is that they cannot get enough of it. Sometimes I am embarrassed by the prices they pay us." 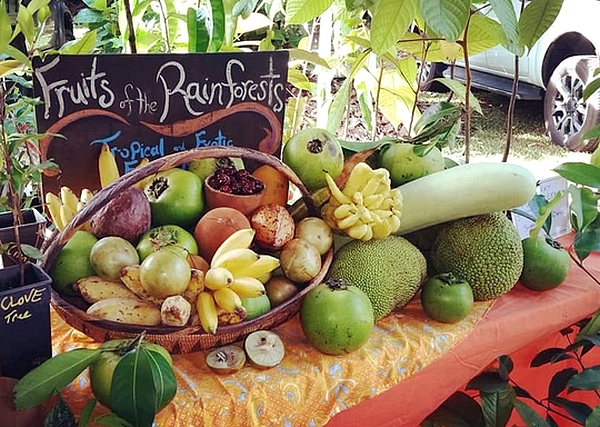 Mr Salleras says demand for exotic tropical fruit in Australia is generally high because people are looking for different tastes and there are more people becoming vegans, fruitarians or vegetarians.

"For our fruit, we always pay a fair bit of attention for detail on making sure things taste good right through to the consumer," he said. "There are some other growers who grow the same types of fruit we do, but they get terrible prices, where we get amazing prices at times. So, our consistent reliable quality control is probably a key thing that drives it. But I remember when avocados were an exotic fruit and only on a backyard tree. Perhaps what we are growing now could potentially become mainstream one day, like durians are in other countries. Deservedly, it is the king of tropical fruits. Most cultures cannot get enough of it, it is just a new one for Australia." 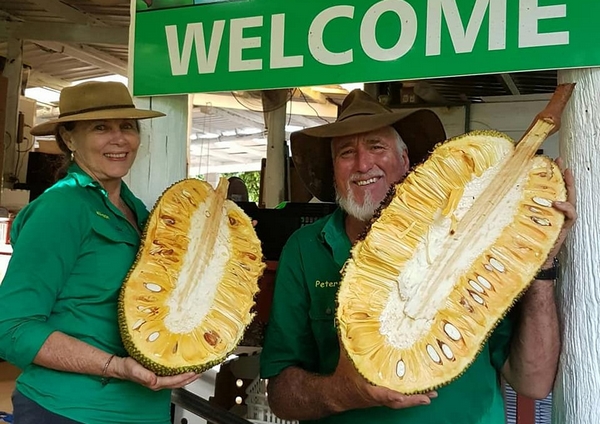 Photo: Alison and Peter Salleras with their jackfruit

Instead of bulk product lines, Fruit Forest Farm grow high-value niche market fruits, which means taste is of vital importance. Mr Salleras says that he knows of a lot of consumers who have been turned off fruit, generally, through bad eating experiences, which can be prevented if growers take more care throughout the picking and packing process.

"In this day and age where you have got machinery that can test every fruit and fast, it is inexcusable (not to have good quality)," Mr Salleras said. "We make sure we get good feedback from our agents; that's what we like and what has to happen. People buy McDonald's because they know what it tastes like every time, but some fruit varieties it is pot luck. I actually bought some fruit that was produced from a local major grower, and it had a Brix level of 10 and no other redeeming flavours. It should have been dumped, but instead, it was put on the Australian domestic market. I would be ashamed if I was that company, they are big and they knowingly put a lot of volume out there. They need to be taken to task because that just kills product lines for not only them but other growers too. We are the opposite of that. When we do jackfruit, we pick it ripe and harvest every day, currently, we pick tree-ripe soursop and there are other fruits we harvest twice a week to get the best maturity. That costs us more but it is still cost-effective." 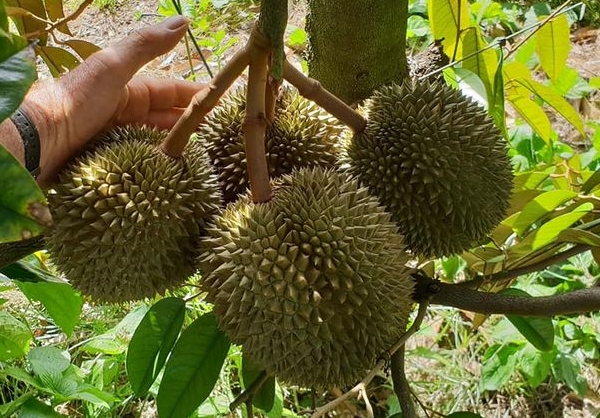 The ease in harvesting has been assisted by the introduction of a unique and innovative style of growing exotic fruit trees in the tropics, according to Mr Salleras. After two damaging cyclones affected the area, the ‘Tatura’ trellising method helps the workers to get the fruit off the tree and into the cold chain as quickly as possible.

"The growers who don't do that are probably our best friends," Mr Salleras said. "But our trellising has really been a saviour for us. It not only helps us get the benefits other temperate fruits like stone fruit, apples and pears get, with better production and quality control, but it also makes it cyclone proof. That has been a game-changer for us in the tropics; you grow a tree for a long time and it's a big loss to have it blown out of the ground. It gives us faith that if we get a category five cyclone we will still be here and in business." 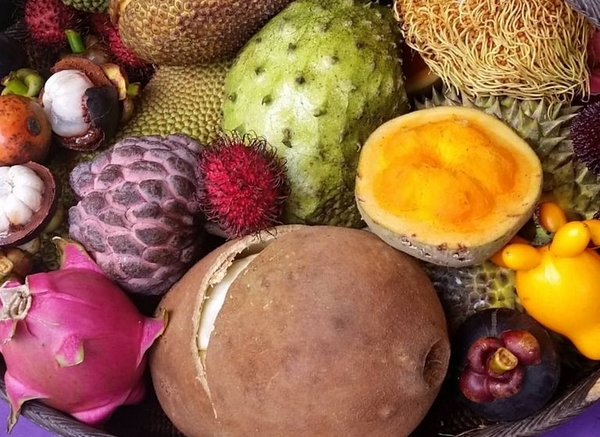 Social media has also been a major boon for the company in being able to source and contact potential customers, and selling a lot of the fruit quickly through a social media post. While Mr Salleras explains that it is a constant trial and error process for his business in discovering what fruit species and varieties will be successful on a commercial scale.

"Compared to other countries, Australia doesn't get as much support from the government. We do it all ourselves," he said. "You trial stuff, and if it doesn't succeed you go back to the drawing board. We do a lot of that which cost us money. There is no big-scale research, so we have to wing it; some things you think will grow well don't and things you wouldn't expect to grow we can. We are continually trying new species here and within a species, we are trying different varieties. So, it is exciting in many ways." 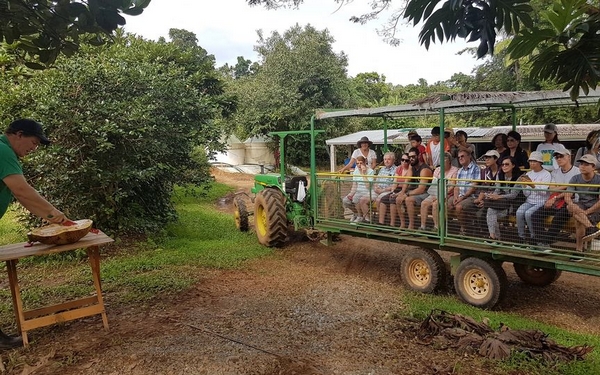 Another part of the Fruit Forest Farm's business is the on-farm tours. It was affected throughout this year by the COVID-19 pandemic and lockdowns, but tours have recommenced with a small group of Vietnamese Australians exploring the farms' tropical fruit range this week. Mr Salleras says it gives particularly expats and Asian visitors a chance to reunite with the fruits and flavours that they grew up within their homelands.

"You know you have struck a chord when they see the fruit and their eyes light up," he said. "They often say it reminds them of home and they tell us the ways that they like it; Alison asks them how they cook with it or other uses for it. So, it is two-way traffic, we find out what tastes they like. Also, most people come from the cities, so we can educate them on how we grow it and what it looks like on the tree, and they go home with a better idea. We often hear stories where people see rambutans and it reminds them of our farm. I have heard that many times before; we are not the only rambutan grower but it reminds them of this experience."