On Nov. 10, the European Union imposed an additional retaliatory tariff of 25% on a range of U.S. agricultural products. This new tariff affects both fresh blueberries (HS 0810.40.50) and some frozen blueberries (those imported under tariff lines HS 0811.90.50 Vacinnium myrtillus and HS 0811.90.70 Vacinnium myrtilloides and Vaccinium angustifolium). This development will take the total EU tariff on U.S. fresh blueberries to 28.2%, and on those frozen lines listed to 25%.

It’s important to note that the other main frozen blueberry tariff lines, HS 0811.90.19.90, HS 0811.90.39.90, and HS 0811.90.95.70, are not included in the EU action. Additionally, the final EU tariff list did not include dried blueberries. This adjustment may reflect the reduced retaliatory amount sanctioned by the World Trade Organization (WTO). It was originally anticipated that the EU would sanction up to $11 billion in retaliation against the U.S. The final amount was instead $4 billion.

NABC emphasizes that other frozen tariff lines may be available that are not subject to the EU retaliatory tariff. Other lines applicable to frozen blueberries may include the following, some of which are still subject to high EU MFN tariff rates: 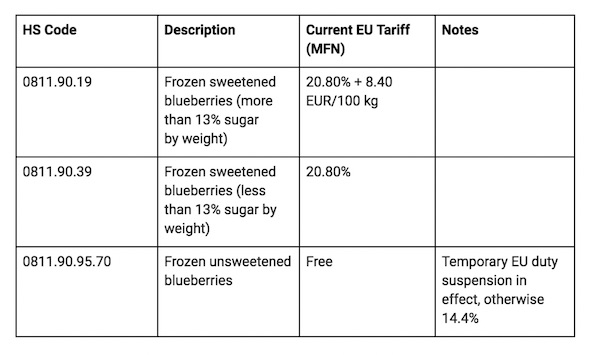 As background, in October 2019, the Trump administration imposed tariffs on EU products following a successful ruling at the WTO against illegal EU subsidies to Airbus. This October, the WTO authorized the EU to impose similar tariffs on U.S. goods following the EU’s successful ruling at the WTO against illegal U.S. subsidies to Boeing. The EU did not immediately implement tariffs and indicated that it would wait until after the election to act. Now that the election is over, the European Commission is proceeding with the implementation of retaliatory tariffs.

NABC received confirmation that the UK will impose the retaliatory duties as part of this EU action as long as the U.S. duties on Airbus remain in place. However, it should be stressed that the EU and UK are keen to reach a resolution on this issue.