“The final step toward 100% reusable water”

The final addition to Van Kessel Fruit's water treatment system is almost ready. This system removes the clay and sludge after the water has been drained. "You don't want to know what kind of rubbish sometimes comes out of the orchard," says Jacco van Kessel. In the Netherlands, the owner of Van Kessel Fruit decided to invest heavily in an optimal water treatment system.

He wanted to reuse his farm's water. That was four years ago. Jacco has managed to get that up to 90% so far. This last step should bring that to 100%. "Well, say 98% for sure," says Hans Blaak of VAM Watertech. This company supplied Van Kessel's systems. "Apples and pears always retain a bit of the water." 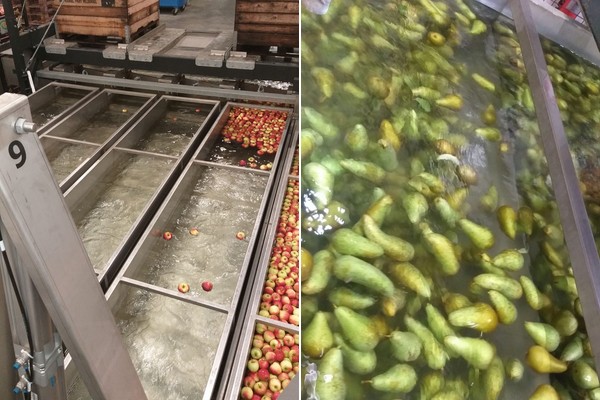 “The complete system consists of four steps. Water from the dumpers and channel flow along these," explains Hans. "Firstly, we use sedimentation to remove the clay. Here, 95% of the visible pollution is already removed from the water. A lot of water used to be lost here. It would remain in the silt. But we've been able to prevent that, using a post-draining process."

Ozone and UV
Sand filtering follows this sedimentation step. The water is then intensively cleansed using Ozone and UV. "These remove all the bacteria from the water. That includes E-coli and Listeria. But, it also gets rid of fruit fungi and spores as well as washed-away pesticides. That's a crucial step. If you don't do that, it causes an accumulation in your water channels. The amounts of bacteria, fungi, and pesticides build up." 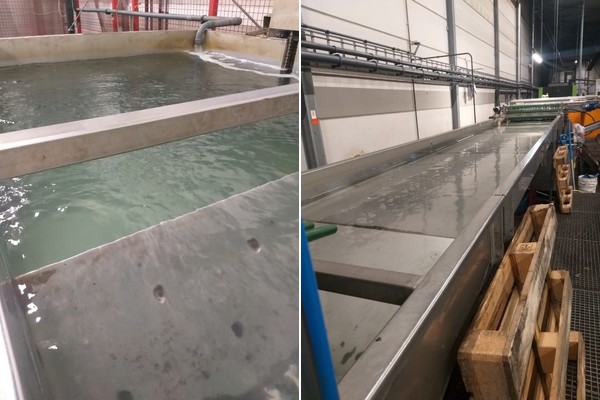 Water in Van Kesse's dumper system is used for more than four weeks.

Treating water on the size and scale Van Kessel is doing is a first for the Netherlands. "Jacco is a frontrunner in these kinds of developments," says Hans. "He's set the bar quite high for himself and us as specialists. But we did it. Now we have a completely closed system. We can use it to disinfect the water fully."

About more than just saving water
The investment was initially mainly meant to save on water usage. But over the years, Jacco realized this system has additional benefits. "First and foremost, food safety and hygiene," he says. "Killing, particularly, the bacteria has proved essential. That prevents the cumulative effect. That's certainly an added value. Supermarkets are becoming increasingly strict about food safety and pesticides on fruit and vegetables."

Investment
Hans concedes such a system can be considerably costly. The technology like that supplied to van Kessel is now available in modules. So, a complete system can be implemented in steps. "The investment in water treatment requires a slightly different approach than other machines. It doesn't lead directly to a turnover increase or improved margins. However, it's increasingly becoming a prerequisite for responsible water usage while maintaining or improving food safety."

"Our clients recognize that this investment saves them money and cleaning time. For example, the machine can automatically purify the water at night. Then you can start the next day with virtually drinkable water. Clean water also creates a pleasant working environment. And your clients get a good impression. These factors are somewhat harder to express in monetary terms. However, they certainly play a role in your company's overall image."

Blaak points to situations in other countries. "Water is becoming increasingly scarce. With such a water treatment plant, you're prepared for the future. Not only when it comes to stricter retail and consumer demands. But also regarding the environment. You'll, therefore, have to fork out this cash anyway. Rather do it right the first time. And not only once it's a dire need. Then you'll have years of enjoyment. And the peace of mind that it's been organized well on time," he concludes.