During the Singles’ Day Sale his year, Tmall’s turnover exceeded 498.2 billion yuan and JD.com’s accumulated order value exceeded 271.5 billion yuan. Together, they reached a record high turnover of 769.7 billion yuan. The period for Tmall’s data this year was extended from the day of November 11 in previous years to the entire sale cycle, resulting in a longer data window. As a result, Tmall’s final data this year increased by 85.6% year-on-year. 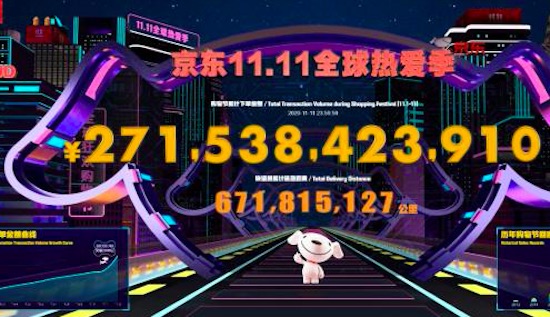 On JD.com, during the sale period, over 300 million pieces of new items were sold, the turnover of more than 20,000 brands on JD Supermarket doubled compared with last year, and 13,173 domestic brands saw sales speed double. On Tmall, more than 450 brands had a cumulative turnover of over 100 million yuan. As of now, a total of 31,766 overseas brands and 2.1 million brick-and-mortar shops have participated in this sale, and the turnover of 105 industrial zones exceeded 100 million yuan.

Jiang Fan, President of Tmall, revealed that compared to the same data window last year, the GMV of the sale this year increased by 103.2 billion with a growth rate of 26%, the highest growth rate seen in the past three years.