"Guacamole is always a part of my Super Bowl menu, this year won't be different"

This year Avocados From Mexico launched their first ever in-store celebrity shopper engagement program to encourage avocado consumption during the Super Bowl. The program, which carries the slogan “Make The Big Game Your Bowl Game,” features Hall of Fame quarterback Troy Aikman and sportscaster Erin Andrews. The campaign also includes $1 million shopper sweepstakes. The merchandising for this shopper campaign is available for retailers to order until Friday November 13th. 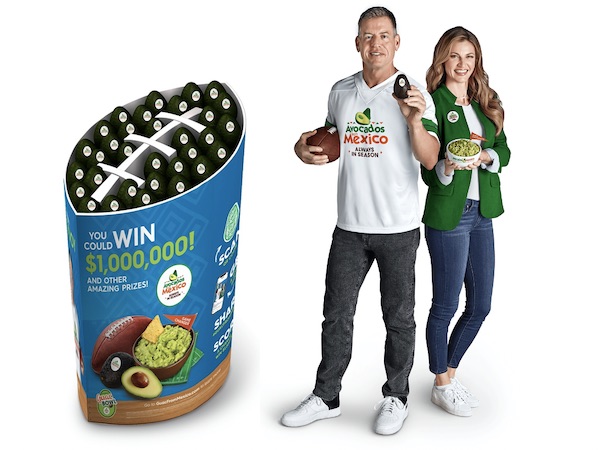 Avocados and guacamole: Staples for game day celebrations
The overall popularity for avocados has been on a steadily steep upward trajectory for at least the past decade, if not longer. Aikman shares why he believes avocados continue to gain popularity with American consumers: “More and more people are discovering the benefits associated with avocados, and with each year the population as a whole seems to be trending more toward eating healthier so avocados are a natural part of that.”

While avocado consumption has been growing as a whole, for sports fans and specifically for Super Bowl celebrations, they have become a staple item and one of the largest events of the year for avocado consumption – avocado fans and football fans go together. “I don’t know anyone who doesn’t like guacamole, or avocados. I think one of the reasons guacamole is such a staple for the Big Game is because it’s so easy. I put together a Super Bowl menu every year, and its dependent on what team is playing; I usually get food from the areas that each team is from, but guacamole is always a big part of it. It’s not just around the Super Bowl either, for our house it’s an everyday thing. It’s easy to make, it tastes good, and it’s healthy,” Aikman shares.

Andrews agrees, adding: “It’s something that everyone can enjoy, and it’s a staple at every tailgate. It’s easy, there’s no fuss, and avocados from Mexico are always in season, so the ingredients you need are always ready to go.”

Avocados From Mexico Super Bowl merchandising campaign
The campaign launched by Avocados From Mexico includes in-store signage, bins and life-size cut-outs of Erin Andrews and Troy Aikman, digital engagement as well as other traffic drivers, such as shopper sweepstakes. “This is the first ever Guac Bowl Stadium Experience and we had a lot of fun doing these and voicing the videos – when consumers scan the QR codes on in-store merchandising materials they’ll see the interactive videos and they’ll be able to learn different recipes for guacamole as well as have a chance to win up to one million dollars. It’s a great way to get everyone involved, especially with the Super Bowl looking a little different this year. The entire football season has looked a little different in general this year and this campaign is a great way for consumers to still feel like they are a part of it, making the guacamole and enjoying the Super Bowl at the same time,” Andrews shares. 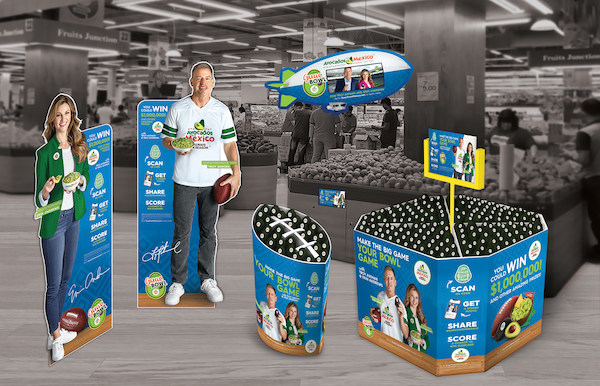 Aikman adds that while game day celebration might be different, much will also be the same: “The Super Bowl parties won’t be what they were for most people – I know mine won’t be – but the serving of avocados and guacamole will still be there. Even though the gatherings won’t be as big or elaborate, people still want to get together, and I don’t sense any way that the changes we’ll likely see will change the consumer habits too much as it relates to avocados or even the need to get together to celebrate the big game.”

The Super Bowl and the celebrations that go along with it are high avocado consumption events – and not just for football fans. “The Super Bowl goes beyond just appealing to football fans, it’s the one game a year that brings everyone together, and with consumers looking to buy avocados for their guacamole during the game, I think this campaign is pretty exciting, and something that the consumers will really rally around,” Aikman concludes.