'The scope of Italian table grapes was limited'

Spanish batches only arrived selectively and did not generate much attention. French Alphonse Lavallée lost importance and left the business on various occasions. All in all, demand was alright and it could be satisfied without any problems. Price changes were rare: Usually only the offers with organoleptic weaknesses were more favorably priced. Imports from Peru and Brazil were still not available; they are expected in week 45. 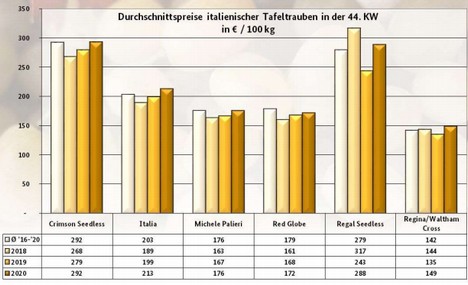 Apples
Domestic batches predominated. There was a very positive demand, which could be satisfied without effort.

Small citrus fruits
The deliveries expanded immensely: Spanish clementines in particular increased their presence. The relevance of Turkish satsumas also increased. Mandarins, on the other hand, lost in importance.

Lemons
Spanish products apparently dominated over Turkish products. The South African supplies were limited and were not completely convincing in terms of quality.

Bananas
The cooler weather improved the trade in bananas in some places. In some cases, however, this trade also slowed down. Price changes were only rarely seen, as supply and demand were usually balanced.

Cauliflower
Even though the domestic season was slowly approaching the home stretch, there were still substantial quantities available. The demand could be satisfied without major difficulties.

Lettuce
Belgian butterhead lettuces were more important than the German goods. Supply was limited. Prices were trending upwards, although a certain degree of uncertainty due to the renewed lockdown was already noticeable in some areas.

Tomatoes
There was movement in the assortment, because the Dutch and Belgian shipments were limited. Instead, Moroccan, Spanish and Turkish consignments could be accessed in an increased framework.

Sweet peppers
The presence of Spanish deliveries grew rapidly, while that of Dutch deliveries was limited. Turkish fruits were at a discount, Belgian ones did not get beyond a complementary status.