Australia's avocado production has continued its year-on-year growth, reaching record levels of value and volume for the 2019/20 financial year, despite the impact of drought, storms, fires and, the COVID-19 pandemic.

According to the recently released "Facts at a Glance", compiled by Avocados Australia, volumes reached 87,546 tonnes, which is a 2,000-tonne (2%) increase on the previous year. Values reached $15.9million, which is a jump of nearly $400,000. The gross value of production (GVP) was estimated at $493million, while the farmgate value was $450million. 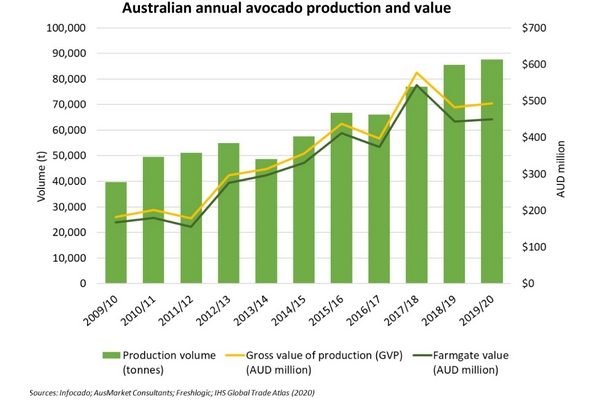 Domestically, there was a slight drop in the value of retail sales to $845million, from $898million. However, at the same time, export values rose from $19.6million to $25million.

“During the last 18 months, our growers have faced almost everything, from storm and frosts in Western Australia to fires on the east coast and the impacts of widespread drought,” Mr Tyas said. “Despite all of this, our growers still slightly increased production, which is an excellent outcome, given the varied weather impacts.” 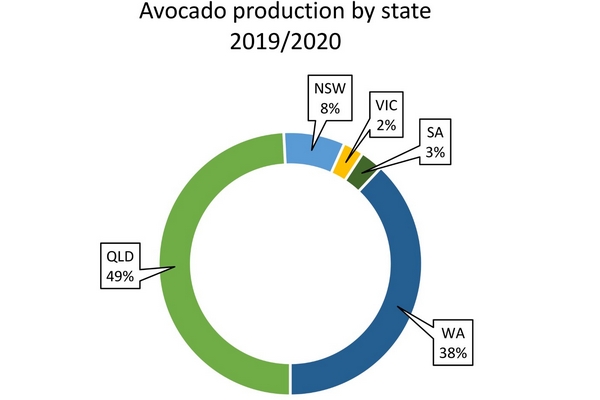 However, Queensland dropped more than 4,000 tonnes, although it was still the highest producing state at 43,069 tonnes. New South Wales nearly halved its production to 6,587.

Hass continued to be the main avocado variety and is produced almost all year round across the production regions across Australia. In 2019/20 Hass represented 80 per cent of production, while Shepard, which is harvested in Queensland through late Summer and Autumn, made up 17 per cent. Other varieties counted for the remaining 3 per cent, and include Lamb Hass, Reed, Wurtz, Gwen, Sharwil, Fuerte, Pinkerton, Gem, and Bacon. 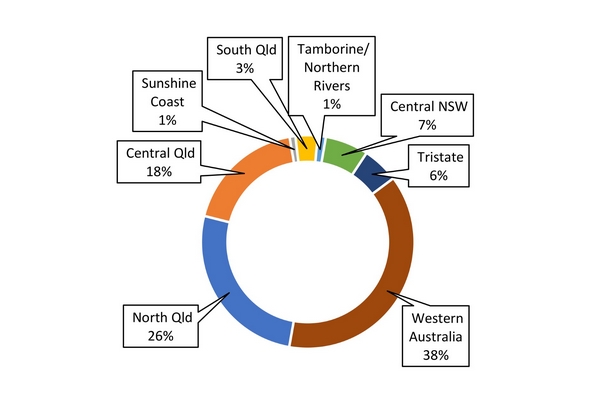 The report also found that Australian production is forecast to increase strongly over the next few years, with at least 115,000 tonnes per annum expected to be produced by 2025. Mt Tyas says consumption also reached record levels in 2019/20, with 3.88kg consumed per person.

“Australians are the highest consumers, per capita, for avocados in the English-speaking world, a title we’ve kept in 2019/20,” he said. “We were especially heartened during the pandemic when after an initial dip in demand, our consumers proved more than happy to eat their smashed avo at home.” 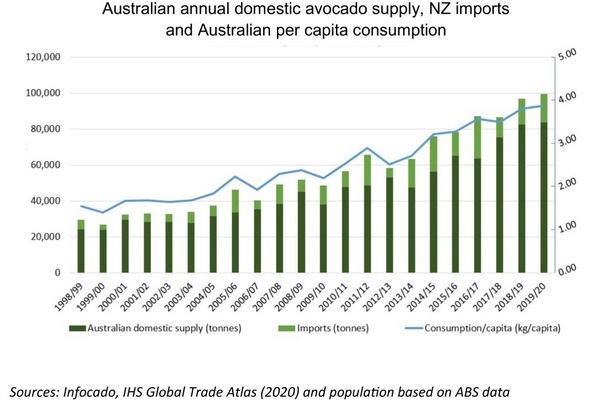 Exports climbed above the 4,000-tonne figure for the first time ever, primarily to Singapore, Malaysia and Hong Kong.

“Exports represented just 4.63% of domestic production, and as production grows, so will our exports,” Mr Tyas said. “We’re a small player in the world avocado market, but we were very happy to reach that level of exports, which included our new market in Japan. In Australia, we are indeed fortunate that our domestic consumers love their avocados.”

Avocados Australia says that a combination of a lighter than expected summer crop from Western Australia, and the dramatic drop in airfreight availability because of COVID-19, means that is unlikely exports will increase in the current year.

Facts at a Glance 2019/20 for the Australian avocado industry was compiled using data source through Infocado. To view the full report visit: https://avocado.org.au/avocados-australia-facts-at-a-glance/