One of the world's leading refrigerated container leasing companies says the COVID-19 pandemic actually led to more demand for its services.

Greg Tuthill, SVP and Chief Commercial Officer at SeaCube, told the online Cold Logistics forum that while there was early concern across the shipping industry back in March 2020 about the coronavirus disruptions, and what that could mean for market stability. He noted that many countries experienced empty retail shelves from panic buying, but the bounce back actually led to accelerated demand in some regions for temperature controlled refrigerated containers. 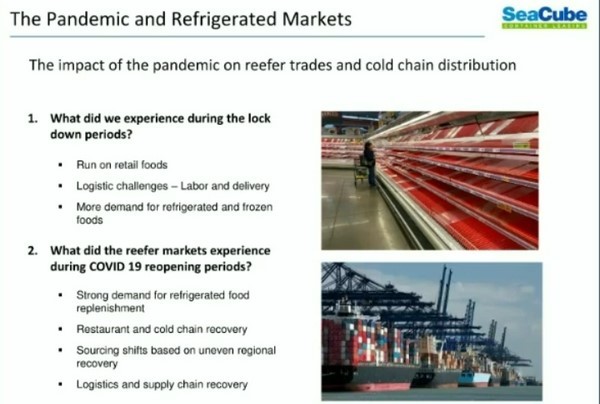 "A lot of comments were made about the supply chain, relative to refrigerated products, both frozen and fresh foods," Mr Tuthill said. "The refrigerated markets were rather resilient to what we experienced. Irrespective of the pandemic, and the economic downturn that we have all experienced, food still needs to move and replenishment cycle still needs to occur. While there was less replenishment that took place at the restaurant level (due to lockdowns), people were still at home eating and some categories shifted where there was demand. Nonetheless, we as a leasing company from a supply standpoint the demand was very high - and in some cases COVID created more demand, because of some of the sourcing and replenishment as we saw some of the resurgence in volume."

He added that moving forward, refrigerated shipping markets can expect a compound annual growth rate (CAGR) of 5.4 per cent through to 2024, which is faster than any other freight market segment, if there are no further major lockdowns in major shipping regions. He identified five key catalysts for future growth, that can be applied both inside and outside the pandemic situation.

"The first is population growth," Mr Tuthill said. "Second is nutrition and healthier diets, which is a factor that is gaining popularity, including the plant-based diet trend, which is driving more refrigerated or chilled product through our cold-chain networks. (Thirdly) Sustainable food sourcing is also something that is high on the priority list for most nations, if not all. That continues to drive more sourcing within that sector. (Fourthly) Proteins continue to be a high-growth commodity within refrigerated markets. Then number five, the requirement and high-growth expectation for the demand of pharma transport for temperature-controlled environments - most importantly to transport vaccines when they are released. Admittedly, initially, they will most likely be moved by airfreight before by ocean freight."

However, Juan Andres Ferrari, Vice President of ACF Global Sourcing in Chile told Cold Logistics that his country is going through some uncertain times due to the higher cost of transportation, and who pays for it; the customer or the shipper, because of the risk involved. 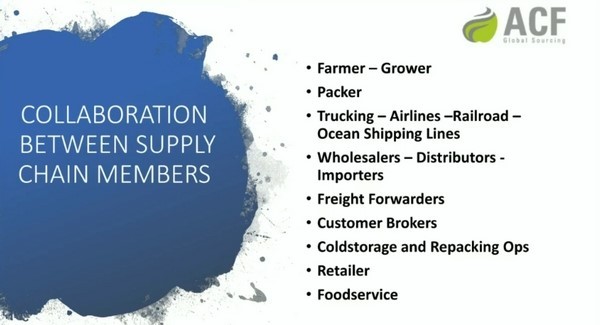 "There is very high pressure because of the transportation issues and uncertainty," he said. "How do you operate when you don't know if your product is going to come, and your orders from the stores or customers will suffer? It is a very critical situation today. We have a supplier in Chile who we are trying to set up a programme for a man in Jordan by air, but today that is nearly impossible, because there is no secure logistics buyer. Passenger flights or cargo planes will charge almost triple what it usually costs. So, a customer who needs products is willing to pay the price FOB, but the CNF price is out of reach due to the uncertainty. This ultimately means the shipper, the grower and the customer will face a higher air rate. We hope it comes back to normal."

He also warned that there could be a gap in fruit supply out of Chile this coming season, starting November and December, with reduced and highly priced fresh produce. But Mr Ferrari says how severe it is will depend on the changing government regulations of the importing countries.

"This will only be solved if supply chain members will collaborate," he said. "Right now, the world is getting small in that it is only three days away from anywhere now. The grower needs to give knowledge on the product, and the best way to ship. All the experts in refrigerated transport will have to play a major role, because today more than ever we need to extend shelf life, because anything can happen. As a result of the transportation issues on the planes, everyone is exploring multi-model scenarios. Often no-one wants to talk about profits, but we need to talk about it because there is no charity - everything has a cost, and we need to reduce waste. Everyone needs to make money."

Director of A-bar-C Services, Andy Connell, says in his country South Africa ports initially struggled to cope with sudden increases in traffic and volume, which was not helped by political complexities.

"The biggest casualty apart from cruise ships was airfreight. It really suffered," Mr Connell said. "Freighter planes and even passenger planes were going nearly full with COVID-19 protection material; medicines, safety gear, PPE etc. So, airfreight really suffered and we couldn't move products from markets to us. Then collateral became all of our imported agricultural inputs such as fertilisers and chemicals - it all got paralysed. We really had to fight to get those to be able to come back into the port."

Mr Connell says that while South Africa did do some things well in terms of achieving the goal of getting food and pharma out, and essentials in, but there were also plenty of lessons moving forward in terms of logistics and transport.

"If you look at the figures, we got all of the fruit that needed to be exported out," Mr Connell said. "But, realistically, if we are honest, talking to the shipping lines and market that received the product they say it didn't come smoothly. It came in 'fits and starts'. We had vessels sit off our coasts for 12-14 days, and some product took over 60 days to get out across our border. We got it out, but it wasn't without a bit of damage. Fortunately, the whole world was in the same boat, so we saved a bit of reputational damage."

But an area in which A-bar-C Services praised the innovative thinking of the farming industry in utilising fruits and vegetables, and delivering a helping hand to residents in need that still protects local markets' ability to earn a living.

"We found our channel through an organisation that started in 2009, called FoodForward South Africa," he said. "They were fantastic at reverse logistics. They were normally taking food from supermarkets that was running close to expiry, bringing back and re-processing it and putting it back on the market for the lower end and aid agencies. FoodForward South Africa stepped in and partnered with the whole fruit industry, and became the distribution arm/network of the goodwill that was coming from our farming communities, producers and exporters. We were able to contribute hugely and significantly to help the desperate people with food and meals." 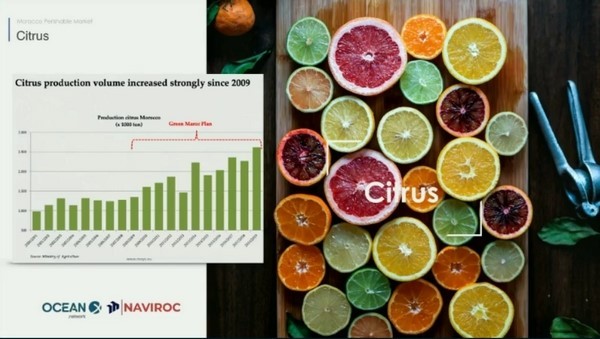 Regardless of the pandemic, Morocco's perishable fruit and vegetable market is grappling with the challenge of high logistics costs, in comparison to falling produce prices, according to Swiss company OceanX. President, Ruben Huber says given the country's key export markets are Europe, the Middle East, Russia, USA and parts of Asia, but logistics costs are nearly triple that of Spain.

"From refrigerated trucks to conventional reefer ships for the United States and citrus movements," he said. "To RoRo (roll-on/roll-off) services in the Mediterranean, to Reefer containers, to airfreight for the Middle East. Almost everything is used to get product to where it needs to go. In terms of cold storage, there is an interesting Dutch study, which found that Morocco is suffering from an underinvestment in cold storage, compared to others. Since 2018, Romeu and French Safrilog have invested, but there is potential for more in the country."

Mr Huber added that for the export season 2018/19 3.1 million tonnes of produce exports came from Morocco. which is 30 per cent of the country’s export earnings. 90 per cent of vegetable exports is destined to the European Union, and the country is also ranked fourth in the world for tomato exports. Other major fruit and vegetable exports include: green beans, peppers, citrus, melons and berries.