The new citrus campaign will start very soon, although some processing facilities have already begun their work, albeit in a testimonial way. The markets have increased their demand because of the COVID-19 pandemic. In fact, there was no fruit left at the end of the previous campaign, in April and May. Something similar has happened in the southern hemisphere's campaign, which has practically ended before the beginning of the campaign in Spain and in other countries in the northern hemisphere.

Processing facilities will undoubtedly encounter different difficulties again, something they're all used to. All the sector's actors will therefore have to chip in to achieve a successful and fruitful campaign for all.

Sanifruit has just launched a new tool to help aid the sector, just as the citrus campaign in the Valencian Community is about to start. 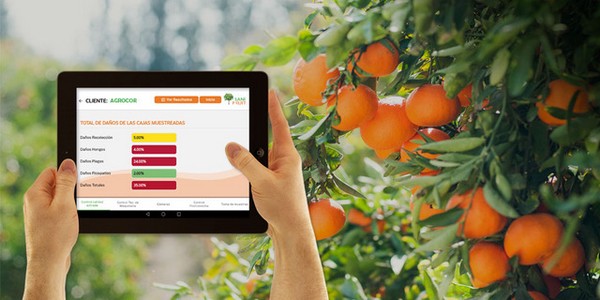 The company launched an App that allows producers to control the status of the fruit upon arrival at the plant, its conditions, the treatment that is going to be or has been given, the status of the cameras; temperature, relative humidity, ethylene level, etc.

The app also allows controlling the state of the fruit as it exits the chambers to be prepared, in case the client requests doing so.

Once these controls have been carried out, the app generates a report that is sent to whomever the company decides.

The report is also sent to Sanifruit, where it is archived for later control, or for use in larger studies or trials, thus helping to increase the effectiveness of treatments.

This is not a new practice for Sanifruit, as it has been keeping paper records for a long time. Going digital is the logical evolution, as it allows savings paper and time while providing its clients with clearer and more complete reports. It is a tool that allows clients who use Sanifruit treatments to create free reports, something that is of paramount importance nowadays.

Sanifruit now provides another tool that helps to improve the effectiveness of post-harvest treatments, in accordance with its maxim: Having a healthy fruit with no pesticide residues is possible!