Global cold supply chain - during & beyond the pandemic

The second day of Cool Logistics got underway with Rachael White, CEO saying they were happy to announce that participant numbers had increased from the first day to 350+ with new people still joining.

Philip Gray, Head of Reefer Shipping Research, Drewry Shipping, Belgium was the first speaker and spoke about how the reefer trade slowed in 2019 and so far was weathering the COVID storm quite well and is expected to grow. He spoke about the shift in trade towards China. In 2009, 27 million tons was shipped in reefer containers which grew to 50 million tons in 2019 which more recently has been due to increased meat imports. He predicted that specialised reefer fleet capacity will decline. Container equipment availability is forecast to remain tight and highly imbalanced, which will reefer container freight rates.

Thomas Eskesen, the Founder of Eskesen Advisory, looked at how reefers have performed in the pandemic. There have been changes but they have done well with less disruption than in the air-freight business. Initially there was a shortage of containers as many of them were stuck in China.

Despite this the reefer trade is still going strong with +4% growth this is mainly thanks to China who is now the world’s biggest importer of perishables. He sees many investment and innovation opportunities in the segment. 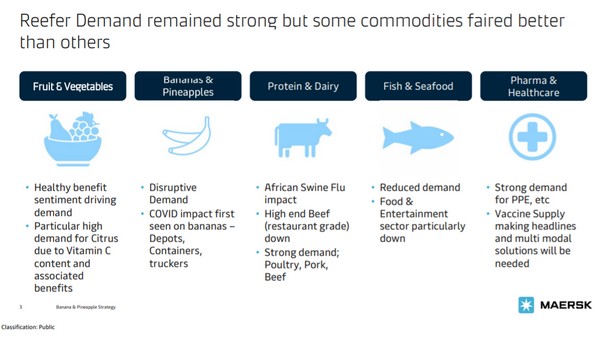 Bruce Marshall, Head of Reefer Solutions, Maersk Line, said that the world had changed and we have adapted. Many challenges had to be faced in order to deliver, especially at the beginning of the pandemic. At China’s 3 main ports containers were held up which was the first inkling that there would be problems. Then the pandemic spread across the globe.

One of the problems faced by Maersk was that crew members had to stay aboard vessels for a very long time, one crew member was on board for 240 days. Illness among the crew also led to disruption to vessel schedules, sometimes authorities refused a ship entrance or there was 14 days imposed between ports. Some ports were closed or had limited capacity, also the different countries had different lock down restrictions and it was not always clear what they were.

All of these factors made it very difficult to position containers to prepare for the production seasons in different parts of the world. Maersk ended up loading empty containers and sending them to where they were needed. There were also logistical problems in getting containers from farms and packhouses to the ports as there was a shortage of drivers.

There was a lot of downtime at customs, but support did come from governments who relaxed some restrictions because it became an issue of food security.